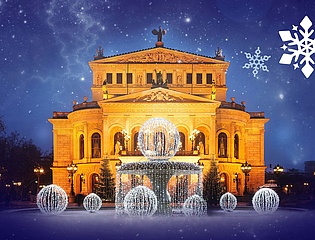 They are a lovely tradition at the festive season: the Christmas guest performances at the Alte Oper. This year two productions were announced: STOMP and WINTERZAUBER. STOMP was supposed to start today, Wednesday, and rehearsals have been going on for days in Offenbach. And also for the WINTERZAUBER the preparations ran on full speed. Still on Tuesday it was reported that the winter children, a children's choir of the Academy of Stage Arts in Oberursel, would have recorded its part for two numbers of the show. For the children a special experience, but especially for 9-year-old Theresa from Bad Homburg-Dornholzhausen, who was to sing the solo part in "A million dreams" from The Greatest Showman.

But now both guest performances must unfortunately be canceled at very short notice. Reason that with effect from Thursday, 16.12.2021, further restrictions and capacity reductions are prescribed for the execution of events. The organizer BB Promotion and the Alte Oper Frankfurt see themselves with great regret forced to cancel all planned dates, as the specifications of the current Coronavirus Protection Ordinance can unfortunately not be implemented organizationally, logistically and economically in the short time.

It was planned to perform with the 2G+ regulations, reduced seating in the hall and mask obligation also in the square. With this already very strict hygiene concept, events could be held as safely as possible in the past weeks. The fact that these regulations have now been tightened once again hits the cultural scene very hard. In the case of the Christmas guest performances at the Alte Oper, tickets that have already been purchased can be returned at the respective advance booking offices. If the tickets were purchased through Frankfurt Ticket, there is a refund form HERE on the Alte Oper site.