Anja Kampmann is the new "Stadtschreiberin" of Bergen
from FFM Aktuell 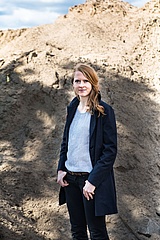 (ffm) Head of Cultural Affairs Ina Hartwig introduced the new Bergen writer to her office on Friday, August 30 with the opening of the Berger Market. This year, the writer and poet Anja Kampmann receives the prize, which comes with 20,000 euros and a one-year right of residence in the Stadtschreiberhaus. At the same time, Clemens Meyer, the current city writer, says goodbye to the citizens.

"Free artistic writing and an office do not actually go together. There is one exception; that of the city scribe of Bergen, one of the most important literary prizes in Germany. He occupies an outstanding place in the life of a writer or, as in this year, a writer," says Ina Hartwig, head of cultural affairs. This year's city writer Anja Kampmann was born in Hamburg in 1983 and has lived in Leipzig since studying at the German Literature Institute. In 2016 her much-noticed volume of poems "Proben von Stein und Licht" was published and in 2018 her first novel "Wie hoch die Wasser steigen" was published. Ina Hartwig, Head of the Department of Culture, expressly welcomes the election as the 46th city writer of Bergen: "I value Anja Kampmann as one of the most interesting young German-language authors. I expressly welcome the fact that this year a writer still at the beginning of her artistic career will be awarded the Stadtschreiberpreis. We will certainly still read and hear a lot about her, even after this year here in Bergen."

The literary prize "Stadtschreiber von Bergen" was created over 45 years ago to raise public awareness and counteract the growing threat to the cultural heritage, the German language. "Literature as a folk festival" is the motto of the annual inauguration in the marquee on Berger Marktplatz. This year the photographer and actor Hanns Zischler will give the speech.

The prize will be awarded by a jury consisting of both expert and citizen jurors. Since the prize was founded in 1974 by Franz Josef Schneider, numerous greats of contemporary German-language literature have been city writers - Wolfgang Koeppen, Eva Demski, Peter Kurzeck, Herta Müller, Peter Härtling and Ulrich Peltzer - to name but a few. They all accepted the key to the town clerk's house "An der Oberpforte" and many of them took the opportunity to live and write in Bergen-Enkheim for a year.