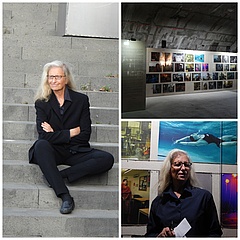 New exhibition of the celebrated photographer

Annie Leibovitz is undoubtedly one of the best and most successful female photographers in the world. While her name may not be a household word to everyone, most are familiar with her photographs. Her picture of John Lennon and Yoko Ono went around the world as well as that of the heavily pregnant, naked Demi Moore. She has portrayed major stars and high-profile political figures for Rolling Stone and Vanity Fair, creating some truly unforgettable images.

In 1999, Leibovitz and her partner Susan Sonntag, who died in 2004, launched "Women," a series of very special portraits of women. This project is what Leibovitz herself calls a "work in progress," a body of work that is constantly being expanded and extended. A collection of new portraits is now on view in the form of a pop-up exhibition at the Montez Family Art Association. The artist herself came to Frankfurt to set up and open the exhibition. In the exhibition space in the Honsellbrücke, not only new photographs can be seen until November 6. Older works from the WOMEN series will also be projected on a video screen. This is intended to illustrate how the role of women today has changed over the past 15 years.

The portraits were commissioned by UBS. Since, according to Thomas Rodermann (Chairman of the Board of UBS Deutschland AG), it is an important concern of UBS to make contemporary art accessible to everyone, admission to the exhibition is free. This also applies to family workshops, which will be offered on weekends during the exhibition (22 + 23 October, 29 + 30 October, and 5 + 6 November). Necessary is only a registration at: www.ubs.com/annieleibovitz-learning

Annie Leibovitz knows that her images can only capture a small part of what actually makes up the person she portrays. But since she is more interested in what a person does than what they look like anyway, she is very successful at capturing portraits that are just not about appearances. She has already succeeded in doing so with some very great women, especially for this series. But there is one she has yet to get in front of her lens: Angela Merkel. But she does not give up hope that the chancellor will also find the time to be photographed for this exciting project.