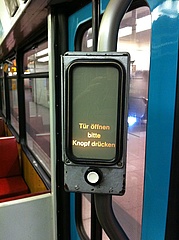 (kus) Petra is the name of the new voice and she will succeed Ingrid Metz-Neun. Having been at home on city buses for about a year, the automatic announcements on Frankfurt's subways and trams were switched to a synthetic computer voice when the timetable changed on December 10. Of course, this can't keep up with the human touch that has been brought by the nationally known announcer Ingrid Metz-Neun for 40 years. But for one thing, Ingrid Metz-Neun is retiring, and for another, "Petra" has clear advantages: Changes, such as to stop names or transfer relationships, can be implemented much faster in the future than before. Where previously it took up to three months before a new announcement was "on track" due to the production process and technical equipment, a few days will suffice in the future.

During the changeover phase, the municipal public transport company traffiQ and VGF ask their passengers for a little patience and support. With the large amount of data to be processed, some things will not run completely smoothly right away. There will be errors, the pronunciation will not always be entirely correct, and sometimes a connection information may not be correct. The VGF and traffiQ are grateful for any information from their customers about these teething problems.