Annual reception of the Frankfurt Chamber of Commerce and Industry 2017: Opportunities for Frankfurt as a business location
from FFM Aktuell 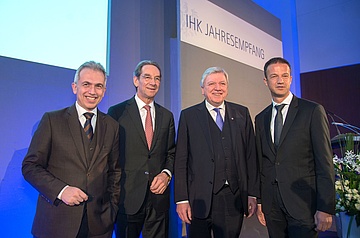 (kus) The traditional annual reception of the Frankfurt am Main Chamber of Commerce and Industry was dominated by new challenges for the economy, but also by opportunities for the FrankfurtRhineMain metropolitan region. In his welcome address to around 1,800 guests, IHK President Prof. Dr. Mathias Müller mentioned the buzzwords USA, Brexit and the integration of refugees, which have strikingly changed the political worldview over the past year.

Müller addressed Donald Trump's inauguration and noted that there is a great deal of entrepreneurial experience to be found on the government staff. "It looks like Trump wants to run the U.S. most like a CEO runs his business," Mueller said. With this program, he said, he is pursuing growth for America as well as the economy. Against the backdrop that the U.S. is the most important trading partner for Hesse, he said, attention must be paid to ensuring that transatlantic trade relations continue to develop in a stable manner.

Looking at Europe, Müller stressed that foreign trade with the United Kingdom was threatened with losses. "The European Union must come to terms with the consequences of Brexit," he said, stressing that it was important to look ahead and see what opportunities there were for FrankfurtRhineMain as a business location. This is because many companies, particularly from Asia and the Arab world, are looking at other locations, he added. "FrankfurtRhineMain is one of the favourites for many of them," said Müller. "We are pleased about this, because it confirms the assessment that FrankfurtRhineMain has become increasingly attractive in the international competition between metropolitan regions in recent years."

The planned merger of the Frankfurt and London Stock Exchanges was also viewed by the IHK president in terms of Frankfurt as a location. "We are convinced that essential functions of the stock exchange must remain in Frankfurt, so that this radiates to the financial centre as a whole and it can fulfil its economic function in the long term," Müller emphasised. The IHK Frankfurt put its trust in the Hessian Minister of Economics as the responsible body of the Hessian stock exchange supervision, that he would have the question of supervision as well as the safeguarding of the further development of the financial centre in mind when making his final decision.

Fredi Bobic, Sports Director of Eintracht Frankfurt Fußball AG and guest speaker of the evening, began his speech by looking back to his early days in Frankfurt, when he was met with the greatest scepticism. "I am of course aware that I have to deliver, that I have to be successful in order to get the chance to settle here in the long term," he said, summing up his initial impressions. However, he said he now feels he has arrived: "I know what a Bembel and an Ebbelwoi from the Gerippten is." During his speech, Bobic stressed the importance of football as a job engine for a city and a region: "Eintracht Frankfurt is the city's best-known advertising medium and the biggest multiplier of the Frankfurt name."

Minister President Volker Bouffier took stock of the past year in his welcoming address. He said it had been successful despite numerous challenges for the economy. "The highest number of employees subject to social insurance contributions and the lowest unemployment rate since the early 1990s are clear evidence of a vibrant economy in Germany," he said. He added that Hesse and the Rhine-Main region were the driving force behind the ongoing upswing. The state is in a stronger economic position than ever before in its 70-year history. The outlook for companies remains positive for 2017 and the coming years. At the same time, it is important to prepare for the coming economic changes. These include, for example, Brexit, which the region must use wisely, or the integration of refugees into the local labour market. "Even if the challenges are not getting any smaller, we have every reason to tackle them with confidence. So that Hesse, with Frankfurt as the heart of a prosperous Rhine-Main region, will remain one of the strongest economic states and the most attractive location in Europe in the future," said the Minister President.

In his welcoming address, Lord Mayor Peter Feldmann emphasized that Frankfurt is much more than a financial metropolis and logistics hub. "Frankfurt is an industrial location with tradition, offers attractive jobs and boasts high performance and productivity. Frankfurt is strategically well equipped for the major challenges such as Brexit and digitalisation," said the Lord Mayor. A major plus of the FrankfurtRhineMain economic region, he said, is the internationality of its population and economic relations. "For business and for leisure, fast connections and short distances are helpful, and Frankfurt is also top in this respect," added Lord Mayor Feldmann. "Frankfurt is and will remain a place of tolerance and freedom, and a safe place for the people who live here, as well as for those who are used to doing fair business here."