Another Eintracht vaccination campaign at the stadium
from FFM Aktuell 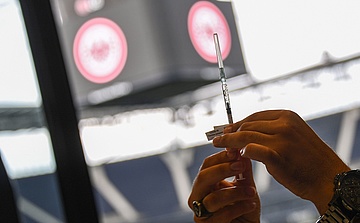 This past weekend, a successful vaccination campaign by Eintracht Frankfurt in cooperation with the Frankfurt Vaccination Centre and the German Red Cross Frankfurt ran at Deutsche Bank Park. Many fans took the opportunity to have their vaccination administered with a view of Eintracht's hallowed turf. Those who missed this opportunity will now get a second chance: in cooperation with Dr. Ziegler GmbH, Eintracht is launching another vaccination campaign at Deutsche Bank Park on August 1. Registrations are now open.

Those who want to be part of it should quickly register at in-eintracht-impfen@benediktziegler.de and with a little luck there will be one of 1000 vaccination opportunities with a view of the interior of the stadium. To ensure a smooth process, each person who registers will be given a mandatory time slot. All registrants will be sent an informational packet regarding documents to bring as part of the appointment process.

The action will take place in the premises of the East Stand of Deutsche Bank Park in Block 16 and 18 respectively.