Apfelweinfestival 2019 - Frankfurt celebrates the "Gold to drink"
from FFM Aktuell 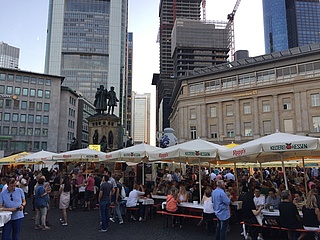 When the press houses of the region gather on the Roßmarkt from Friday, 09 August, to pour over 100 different varieties of cider, then it's cider festival again. For the ninth time this culinary festival around the apple will be celebrated, which attracts up to 120,000 visitors - up to 30 % of them tourists. The weather is currently perfect cider weather - well, to be honest, it's always perfect cider weather in Frankfurt. After all, the annual per capita consumption of around 30 liters in the Main metropolis is far above the Hessian average, which is just 7 liters.

That's why Frankfurt is of course virtually predestined for such a festival. In addition to the numerous different ciders, specialties such as apple wine sorbet, apple wine bratwurst, tarte flambée with apple or apple secco are also offered here. "Apple wine belongs to Frankfurt like Handkäs and Grie Soß. It is the heritage of the region and a living tradition: our signature drink," explained Thomas Feda, Managing Director of Tourismus+Congress GmbH Frankfurt at the presentation of this year's cider festival. It is always worth pointing out that this is the only festival in Hesse where there is no beer! Although there would be discussions year after year whether this should be changed, the result is always the same in the end: At the cider festival there is only cider in all its forms.

"The classic cider has been growing for years. But so have a variety of new products, such as cider mix drinks with currant, pear, cola, quince, passion fruit, lemon and much more - in practical containers, noble longneck bottles or cans in iconic design are conquering the hearts of cider lovers. Gourmets will be spoiled with premium and gourmet creations, such as varietal ciders or sparkling apple wines. In addition, there is a selection of cider products, non-alcoholic ciders and organic products", explained Martin Heil, chairman of the Association of Hessian Cider and Fruit Juice Press Houses. With this variety of products, the wine pressers have been able to win over further target groups.

For years, a special part of the cider festival has been the awarding of the "Golden Apple". Those who harvest their apples at the right time and bring them to the press house, make an important contribution to the care and preservation of the meadow orchard. Orchard meadows characterize the Hessian cultural landscape and are home to countless animal and plant species. A highlight will therefore once again be the awarding of the "Golden Apple" by City Councillor Rosemarie Heilig. Initiators of the honorary prize, which has been awarded annually since 2007 for special commitment to the protection and preservation of Hessian meadow orchards, are the Nature Conservation Academy Hessen, the MGH Gutes aus Hessen GmbH and the Association of Hessian Cider and Fruit Juice Presses. Whoever drinks cider ensures that the orchards are used intensively and thus contributes to their preservation. This commitment is already rewarded for the fourth time by an additional prize money of 1000 euros, which ideally flows back into the project work, for example, through the care of orchard trees.

In addition to the award of the "Golden Apple" was again a colorful entertainment program with music, dialect and comedy compiled. As a Frankfurt resident, you can actually pay a visit to the beautiful festival every day. You can find the exact program HERE in our calendar of events.

If you love cider and lively socializing, you can't miss the Cider Festival this year!