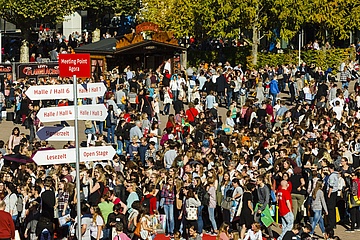 Inky Heart, The Tributes of Panem, Twilight, A Series of Distressing Events and, of course, Harry Potter - much-loved children's and young adult books have long been the stuff of successful films and series. Luring the imaginative worlds and their heroes out of the pages of books, not taking away any of the magic that young readers have created with their imaginations, and yet creating visual fireworks with elements of their own - that is the art of adapting a book template.

The Frankfurt Book Fair Film Award wants to pay tribute to this art and for the past two years has been honouring not only the adaptation of literary originals but also the cinematic realisation of children's and young people's book originals.

Publishers, film producers and broadcasters are now called upon to apply for the Film Award in the category Best Adaptation of a Children's and Young People's Book. Eligible for the selection process are feature films, TV productions and series based on a children's or young adult book. For the first time, the Frankfurt Book Fair is also awarding the prize for films and series that are shown on television and on streaming and online platforms. The submitted productions must be published in 2018 or a maximum of six months after the Frankfurt Book Fair. The deadline for submissions is 20 July 2018

The films that make it onto the shortlist should be available on DVD, Blue Ray or as a stream for viewing by the jury and the literary source must also be made available to the jury as a book. The Frankfurt Book Fair Film Awards ceremony will take place on Thursday, October 11, 2018, from 6:00 p.m. to 7:30 p.m., at THE ARTS+ Area.

Total prizes will be awarded in three categories at the Frankfurt Book Fair Film Awards 2018: In addition to the prize for the adaptation of a book for children and young people, an award will be presented for the best international literary adaptation and for the most beautiful illustrated book on the subject of film.

With the "A Book is A Film is A Game" programme, which traditionally takes place on the Thursday of the fair, the Book Fair has also created a permanent offering for networking between the film and publishing industries. In addition to current trends and innovations in the field of visual storytelling, this year's focus is on the topic of series adaptation. Participants can look forward to best cases, pitching sessions and matchmaking. At the end of the Frankfurt Book Fair Film Day, the Frankfurt Book Fair Film Awards ceremony will take place from 6 p.m. to 7.30 p.m.