Archaeological Garden presents the cradle of Frankfurt
from FFM Aktuell 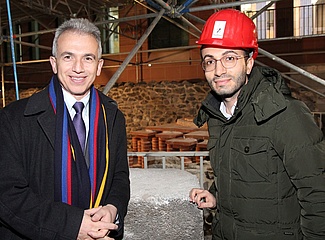 Insights into the city's history

Frankfurt is growing and seems to be constantly changing. It's exciting to follow along, but it's important to take a look back every now and then amidst all the future prospects. After all, Frankfurt didn't become a financial and commercial centre just like that, and it wasn't the work of a party or a mayor that gave it its reputation as a very colourful, cosmopolitan city. Rather, the roots for this lie in the early beginnings of Frankfurt's city history. The Archaeological Garden, which will offer an exciting insight into the city's history in its new museum design from summer 2018 following the construction work on the new Old Town, provides very fine evidence of this.

Now, planning department head Mike Josef ,Carsten Wenzel, acting director of the Archaeological Museum, and Lord Mayor Feldmann have given a first taste of how "the cradle of Frankfurt" will be presented in the future.

(kus) "We are standing today at a historically significant site," said Planning Director Josef. "Many important decisions for Frankfurt and all of Europe were made in the Königshalle, whose walls we can see in the Archaeological Garden. In future, these will be given the status and attention they deserve through museum treatment. I am very pleased that in future we will be able to explain to visitors and citizens even better how our Frankfurt developed from its cradle into a European financial metropolis."

Wenzel explained that the decision by Charlemagne in 794 to create a single European currency, for example, was groundbreaking for this development. In the future, his house will take over the museum treatment of the walls. "The garden will be open to visitors during the day. With the help of display boards, life pictures of Roman and Carolingian Frankfurt, a bronze model as well as original finds, they will learn more about the different eras of the settlement of the cathedral hill. In this way, they will learn about the history of Frankfurt from the first Roman military installations from around 70 onwards through the Carolingian period to the late Middle Ages.

A central role in the presentation will be played by the use of the area as a royal hall. Around 500 AD, a Frankish royal court was built in place of Roman military installations. The place received its name Franconofurd - ford of the Franks, which is still valid today. Around 820 AD, Emperor Louis the Pious had new palace buildings built, of which the walls of the King's Hall (Aula regia) and a representative gate building are still preserved today. In the 10th century, Frankfurt developed into a fortified city under the Ottonians. From the high and late Middle Ages, cellars of burghers' houses have been preserved.

"Together with the reconstruction of Frankfurt's Old Town, the newly designed Archaeological Garden will become an important attraction in the heart of our city," said the head of planning. "I look forward to the expert museum treatment and my first visit after its completion in 2018."