Around 50,000 visitors at the eleventh Bahnhofsviertel night
from FFM Aktuell 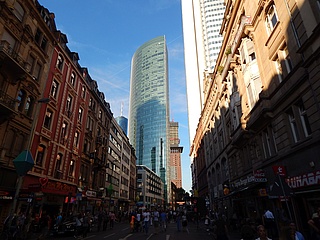 In bright sunshine, people flocked to the quarter around the main station yesterday to celebrate the eleventh Bahnhofsviertel night. According to police estimates, about 50,000 visitors were on hand. People partied in the streets, ate, drank or explored the quarter at 50 official program stations and numerous shops in a sociable get-together.

This year, for the first time, the Bahnhofsviertel night had a motto, which was "Arrive". "The Bahnhofsviertel ensures that Frankfurt is the most diverse city in Germany and as international, as cosmopolitan, as no other city in this country. We are proud of that. We don't want to hide that, we want to show it," stressed Lord Mayor Peter Feldmann during the opening event in front of Club OYE at Taunusstraße 19.

Problems and conflicts exist in Frankfurt and, of course, in its Bahnhofsviertel just as they do in any other metropolis, said the Frankfurt city leader. "We have to address these, look closely and not look away," Feldmann said. The fact that this is happening and that work is being done on the image of the district, not only during the Bahnhofsviertel night, is also thanks to social workers, drug help, police officers and the forces of the public order office, Feldmann said, praising the commitment of the institutions and help facilities represented in the district. "Frankfurt has become great through diversity and contradictions and not through simplicity. We will not let this diversity be ruined by intellectual arsonists," the Lord Mayor positioned himself against racism and exclusion during his opening speech.

After the traditional interdenominational prayer for peace and a musical performance on the main stage in Taunusstrasse, the numerous program stations invited visitors to discover Frankfurt's smallest and liveliest district. While quite a few visitors partied in the surrounding clubs until the early hours of the morning, Thomas Feda, managing director of the municipal Tourismus+Congress GmbH, which is responsible for the security concept, drew a positive conclusion: "This year, too, the Bahnhofsviertel Night remained largely peaceful despite the large influx of people, also thanks to the support and understanding of residents and business operators from the district."

A number of special programmatic features, designed this year to draw visitors' attention to the cultural diversity of the Bahnhofsviertel and its residents, also went down well with the audience: for example, singers from the Frankfurt Opera gave an acclaimed pop-up concert on a balcony at the Bacco restaurant in Kaiserstraße. In addition, eight residents from the neighborhood talked about how they arrived in the neighborhood and how it changed over the years in an interview film that was broadcast on three large LED screens.

Overall, the organizers drew a very positive response, which most visitors can also agree with