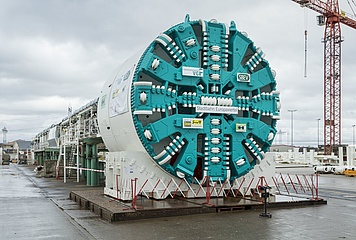 Commissioning of the line is postponed to 2025

The first 240 metres of the line in the direction of Güterplatz could be excavated at a depth of 22 metres, but at a lower speed than planned by the construction company. After the tunnel boring machine had reached the area of the future Güterplatz station, the machine was stopped for an inspection. In the process, far excessive wear and tear was detected on the cutting wheel, with partial destruction of the mining tools, making repair of the cutting wheel unavoidable. According to Ingo Kühn, Managing Director of Stadtbahn Europaviertel Projektbaugesellschaft, the construction company stated that it was necessary to create a sufficiently large and groundwater-proof area for the repair in which the repair could be carried out.