"Autumn in the City" - Showmen say: Thank you, Frankfurt!
from FFM Aktuell 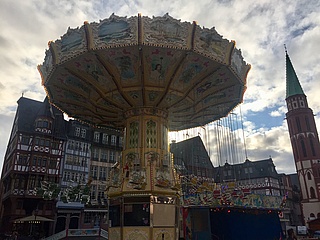 Also for "Autumn in the City" the new lockdown means the premature end! After Saturday, the carousels will once again be at a standstill and the bratwurst grills will remain cold. Although the market, which was spread over the entire city centre, had to end a week earlier than planned, in the end, despite all the worries - also due to the cancelled Christmas markets - there is also a good feeling. Thomas Roie, Chairman of the Schaustellerverband Frankfurt Rhein/Main e.V. (Frankfurt Rhine/Main Showmen's Association), can thus draw a positive balance of "Autumn in the City": "It was an unbelievable effort that was very worthwhile," said Roie. After a short delay and a readjustment of the hygiene concept, carousels had been spinning again in Frankfurt since 9 October for now three weeks for the first time in this year marked by the Corona pandemic. For the first time since the 2019 Christmas Market, the showmen were able to set up their stalls with delicacies typical of the fairground and spoil their guests, both young and old. The market, which was planned, approved and carried out under particularly strict hygiene regulations and featured more than 40 fairground offerings, was scheduled to run until November 7. "But of course, the rapid increase in infection figures also means for us that yesterday was the end and we will start dismantling on Monday. On Tuesday, we hand over the six places in the Frankfurt city center broom-clean," said Roie, who also with a view to the coming months, which would actually be particularly strong sales for the industry, an "urgent appeal to politicians".

There are several points to the balance of this first fair this year in the largest Hessian city: "First and foremost, we would like to thank the very understanding, hands-on and helpful employees and decision-makers of the city of Frankfurt, who have given us the opportunity that we were finally allowed to work again. This cannot be taken for granted this year and is therefore particularly positive. We were rightly under special scrutiny during this demanding period," reports Roie. For example, the rides and food stands were specially fenced off, employees registered guest names at the entrance to track contacts, and the hygiene rules practiced from the catering industry were applied. "Protecting the health of our guests is always paramount - at Corona Time the advantage is that the rules are known. And also our employees are to be protected - we have, that is important at this point, in the three weeks no positive Corona case in our team," knows Roie.

Started "autumn in the city" with the anticipation that "the merry-go-round of hope turns again". "We are more than happy that our own expectations have been exceeded: We were able to make many thousands, especially small guests happy in the past three weeks. Especially many children and families used the rides, the wave flight, the children's carousel and the &sbquo;Music Express'. Yes, there were happy children's eyes, happy and laughing people. &sbquo;Autumn in the City,'" Roie said, "produced many moments that were like cotton candy for the soul."

That Frankfurt's Christmas market was also canceled this year is met with understanding by the showmen. "But of course it also hits us hard. Financially, we are at the limit, but also mentally. No one of us has ever had to endure such a year. Therefore, I make an urgent appeal to the politicians in Berlin and Wiesbaden to help our industries quickly and without complications. We urgently need financial support to get through the extended Christmas break in this difficult year," says Roie. And finally, the showmen's chairman emphasises: "Normally, we would not set up again for the Dippemess in Frankfurt until Easter. We have now proven that we are also able to conjure up colourful glimmers of hope in the city at short notice - and would like to do it again as soon as possible. We're ready."

And we too would like to see downtown filled with bright eyes and joyful laughter again soon. If we all show solidarity, we can do it. Therefore, also from us a big thank you to the Schaustellerverband Frankfurt Rhein/Main e.V. for these three special weeks and to everyone who made an action like "Herbst in der Stadt" possible by sticking to the rules.