Award for the Förderverein ExperiMINTa
from FFM Aktuell 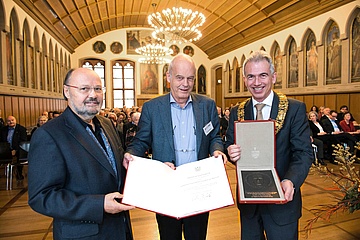 (kus) The Walter Möller plaque for civic engagement was awarded to the ExperiMINTa Frankfurt support association at a ceremony in Kaisersaal on Tuesday, November 15. In his speech, Lord Mayor Peter Feldmann emphasized that the association's hands-on activities whet people's appetites for science and technology. "Scientific phenomena and mathematical correlations become understandable and tangible through experimentation," the city leader elaborated and went on to say, "As a hands-on museum, ExperiMINTa stands for pedagogy that is fun."

The fact that this outstanding offer is founded and maintained by voluntary commitment, Feldmann continued, is to be particularly appreciated, which is why the jury agreed to award the Walter Möller Plaque 2016 to the Friends of ExperiMINTa Frankfurt.

Association Chairman Ulrich Bosler thanked the City of Frankfurt and said, "We are honored to be included in this series of important Frankfurt civic initiatives." Together with his predecessor in the office of chairman, Norbert Christl, Bosler accepted the award. Christl explained the concept of the museum, which is unique in the region: "The combination of activating one's own cognitive processes through doing things oneself, combined with positive emotions: That is our concept, our recipe for success."

The non-profit development association ExperiMINTa Frankfurt was founded in February 2008. Its aim is to open up playful approaches, especially to science and technology, and to arouse curiosity about the great inventions and discoveries of people who have created them over generations. The work in the non-profit association is done on a voluntary basis. 120 experiment stations invite visitors to try things out, arouse curiosity and awaken the inventive spirit.

In memory of the Lord Mayor Walter Möller, who died in office in 1971, the Magistrate honours groups and associations every two years that have made a special contribution to the common good through their outstanding activities. The tribute is accompanied by a cash prize of €10,000. Members of the jury are: Lord Mayor Peter Feldmann, City Council Chairman Stephan Siegler, Rabbi Elisa Klapheck and moderator Tim Frühling