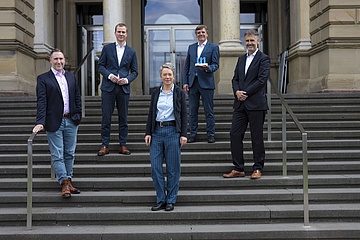 The success story of the "Making van Gogh" exhibition, which was on view at Frankfurt's Städel Museum last fall through the spring, continues even after the show has ended. After the museum had already enjoyed a record number of visitors, it has now also received an award: the Dr. Marschner exhibition prize "Ausgezeichnet Ausgestellt". This year, the Dr. Marschner Foundation is once again awarding this prize for an outstandingly curated exhibition. In this context, the title "Ausgezeichnet Ausgestellt" is aimed at all institutions of non-profit and public sponsorship in Frankfurt am Main and Offenbach. From the applications submitted in 2019, a jury drew up a shortlist of possible prize winners. Seven projects were selected that stood out for their substantial curatorial work for both a broad public and a specialist audience. The award is endowed with 25,000 euros and is thus unique in its form in the Main metropolis.

According to the jury's verdict, the 2019 exhibition "Making van Gogh. History of a German Love" of the Städel Museum succeeded most convincingly and consistently in implementing the premises of the Dr. Marschner Exhibition Prize "Ausgezeichnet Ausgestellt". The prize was to have been awarded as early as March. But this ceremony had to be postponed due to the Corona crisis. Now, last week, the prize was handed over in a very small setting and in compliance with the official hygiene and protection measures.

Ina Hartwig, the city's head of culture, said: "With remarkable shows such as &sbquo;Bengal Stream' at the Deutsches Architekturmuseum or &sbquo;Hannah Ryggen' at the Schirn, the shortlist already shows the diversity of Frankfurt's exhibition landscape, which testifies to an internationally recognized curatorial achievement. &sbquo;Making van Gogh' was able to inspire more than half a million viewers with well-known works by Vincent van Gogh, a convincing accompanying program, and through digitally high-quality incentives, making it the most visited exhibition in the history of the house. I congratulate Director Philipp Demandt, the two curators Dr. Alexander Eiling and Dr. Felix Krämer, as well as the project manager Elena Schroll on winning the exhibition prize 'Ausgezeichnet Ausgestellt' from the Dr. Marschner Foundation."

Foundation chairman Peter Gatzemeier added: "The high-quality, sophisticated and diverse exhibition scene in Frankfurt and Offenbach did not make it easy for the five jury members to nominate projects for the shortlist of the Dr. Marschner Exhibition Prize and to name a prize winner again this year. What convinced them was a stringent curatorial performance and its comprehensible implementation for a broad audience. I am pleased that the Dr. Marschner Foundation is using this prize to draw attention to the work of outstanding curators who have succeeded in transparently conveying often complex content."

"In the academically excellently researched thematic exhibition, the curatorial implementation, which interwove the most diverse art-historical approaches, became obviously comprehensible. Not only experts, but also an art-historical layman could grasp all the clearly formulated and presented contents. In &sbquo;Making van Gogh' the reception-historical approach was decisively worked out and actively comprehensible for a visitor on the basis of the exhibits shown. The presentation, outstanding in its mediation approach, from the successful structure to the accompanying podcast, was evident throughout. An all-round impressive exhibition," said Claudia Orben-Mäckler, a member of the jury.