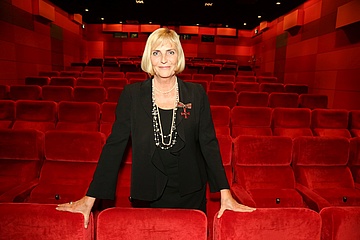 Claudia Dillmann, director of the German Film Institute, has been awarded the Cross of Merit on Ribbon of the Order of Merit of the Federal Republic of Germany.

Boris Rhein, Hesse's Minister for Science and the Arts, presented the award from the German President during a ceremony at the German Film Museum in Frankfurt am Main on Wednesday evening. Minister Rhein paid tribute to Dillmann's many years of commitment to German film heritage: "Claudia Dillmann has a special feeling for the future of film, which she has helped to shape with great expertise, enthusiasm for the moving image and a passion for breaking new ground. Hessen as a film location owes her a great deal and today's honour is more than deserved. I congratulate her warmly on the award," said Rhein in his speech.

The film historian Hans Helmut Prinzler from Berlin gave the laudation: "Claudia Dillmann has rendered outstanding services to the preservation, indexing and accessibility of the German film heritage for more than twenty years, while at the same time opening the view to contexts in Europe. Since the merger of the Deutsches Filmmuseum and the Deutsches Filminstitut, she has been director of one of the most important film institutions in the Federal Republic. I am also personally very pleased about her award."

Since the 1980s, Claudia Dillmann has worked in various capacities to anchor film as the seventh art in cultural awareness. As director of the German Film Institute, one of the focal points of her work is to convey the national film heritage and to continue to keep works of film history visible even in times of digitization of cinemas. It is committed to making film classics and rarities available digitally in order to reach a broad audience and achieve a lasting appreciation of film culture. Cultural exchange is also at the heart of the goEast film festival in Wiesbaden, which she founded in 2000 and which has since become one of the most internationally renowned forums for Central and Eastern European film culture.

Claudia Dillmann was quick to recognise the importance of the Internet for cultural education and in 2005 launched filmportal.de, the central and freely accessible online platform on German film. In 2007, as president of the Association des Cin&eacute;math&egrave;ques Europ&eacute;ennes (ACE), she co-founded the European internet culture portal Europeana. The European Film Gateway, which provides free access to hundreds of thousands of digitized documents on European film history, is also her initiative.

In 2006, Claudia Dillmann completed the process of integrating the formerly municipal Deutsches Filmmuseum into the Deutsches Filminstitut, since when she has been director of the merged institution in Frankfurt am Main. From 2009 to 2011, she was responsible for the extensive renovation of the museum, including a complete redesign of the permanent exhibition, which was funded by the city of Frankfurt, the state of Hesse and the federal government. The Haus am Museumsufer, which received the Museum Prize of the Sparkassen-Kulturstiftung Hessen-Thüringen in 2012, has since attracted attention with ambitious, innovative and popular exhibitions on topics such as cinematic surrealism, Fassbinder & video art, film noir or film & games. The program of the in-house cinema has also won many awards. In addition, Dillmann places great emphasis on a strong educational offering. Thus, under her leadership, a separate department for film education and outreach was established, which has already developed sensational new formats throughout Europe, such as the MiniFilmclub.

Claudia Dillmann, born in 1954, studied German language and literature, art history as well as theatre, film and television studies at the Johann Wolfgang Goethe University in Frankfurt am Main. She worked on the permanent exhibition of the Deutsches Filmmuseum in Frankfurt even before it opened in 1984 and was involved in various exhibitions and projects at the museum thereafter. In December 1989, she brought the archive of film producer Artur Brauner into the collections of the Deutsches Filmmuseum, developed an exhibition from it and wrote an extensive catalogue.

In 1991, she became a permanent curator at the Filmmuseum, and a year later its deputy director. In 1997 she moved to the management of the Deutsches Filminstitut and has been director of the merged institution since 2006.

From 1997 to 2014, Claudia Dillmann served on the board of the Association des Cin&eacute;math&egrave;ques Europ&eacute;ennes (ACE); from 2004 to 2012 as its president. Among the Europe-wide projects she initiated are the online portal europeanfilmgateway.eu and the digitization project on the First World War, EFG1914.

Claudia Dillmann is co-initiator of the Master's programme "Filmkultur", which the Deutsches Filminstitut has been offering together with Goethe University Frankfurt since the winter semester 2013. The focus of her film-historical work is on the film of the Weimar Republic and post-war German cinema. Most recently, she co-edited the publication "Geliebt und verdrängt: The Cinema of the Young Federal Republic of Germany from 1949 to 1963", which also served as the catalogue for the internationally successful retrospective of the 2016 Locarno Film Festival, co-organized by the German Film Institute.