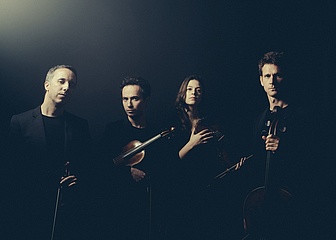 Music enthusiasts will be able to attend on 5. April at the Paulskirche

Electrifying playing, marked by passion, absolute fidelity to the original and simultaneous delight in improvisation: The French string quartet Quatuor &Eacute;b&egrave;ne will accept the 2019 Frankfurt Music Prize at the Paulskirche. Part of the award ceremony on Friday, April 5 (beginning: 7 pm) is an award winners concert, where the musicians will give an insight into their outstanding playing skills. Tickets for the awards ceremony are not available for purchase - interested guests can register free of charge on the Musikmesse website.

The Frankfurt Music Prize has been honouring players on the music scene for exceptional achievements in interpretation, composition, musicology, teaching and the promotion of music-making since 1982. It is awarded annually as part of the Musikmesse, Europe's largest trade fair for the music industry. For the third time, Frankfurt's historic Paulskirche will serve as the venue. Not only will invited guests from the worlds of politics, culture and business have the opportunity to attend the event, but a limited number of tickets will also be available for music lovers. Until April 1, interested parties can register at www.musikmesse.com/frankfurtermusikpreis. If demand exceeds supply, the decision will be made by lot.

The Quatuor &eacute;b&egrave;ne emerged in 1999 from the Conservatoire National de R&eacute;gion Boulogne-Billancourt. The musicians received their first international attention when they won the ARD International Music Competition in 2004. Since then, the quartet has established a firm place for itself in the musical landscape thanks in part to its versatility: The repertoire ranges from classical works to interpretations of well-known film soundtracks and pop songs. At the prize-winners' concert, the four musicians will perform Beethoven's String Quartet No. 7 in F major, Op. 59 No. 1 "Razumovsky". The program will be moderated by well-known presenter Susann Atwell.

All further information on the Musikmesse can be found at www.musikmesse.com