Back from summer break: New Frankfurt-"Tatort" on Sunday
from FFM Aktuell 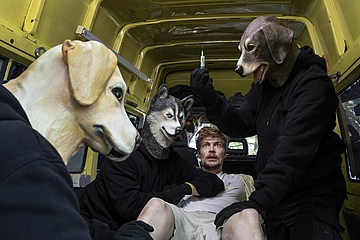 In recent weeks, "Tatort" fans have had to make do with old canned cases. But now the summer break is finally over and with the 13th case of the Frankfurt investigator team Janneke and Brix, the new "Tatort" season starts on Sunday, August 29. "Wer zögern, ist tot" is the title of the new case produced by Hessischer Rundfunk (hr) on behalf of ARD Degeto. It was directed by Petra Lüschow, who also wrote the screenplay. In addition to Margarita Broich and Wolfram Koch, other leading roles are played by Christina Große, Britta Hammelstein, Helgi Schmid, Bernhard Schütz, Tala al Deen, Daniel Christensen, Corinna Kirchhoff, Zazie de Paris, Isaak Dentler and Werner Wölbern.

And that's what Janneke and Brix's new case is all about: in the middle of the day, on a golf course near Frankfurt, Frederick Seibold (Helgi Schmid) is struck down by four masked men wearing dog heads. When he regains consciousness in a dark cellar hole, the two Frankfurt chief inspectors Anna Janneke (Margarita Broich) and Paul Brix (Wolfram Koch) are already on his case: Frederick's ex-girlfriend, Bille Kerbel (Britta Hammelstein), had received a cut-off finger, which she brought straight to the police. Konrad Seibold (Bernhard Schütz), Frederick's father, a well-off business lawyer, however, does not see the point of paying a ransom, believing his son Frederick himself to be behind the kidnapping. Janneke and Brix are surprised by Seibold's stubbornness, who had also been sent a finger and had not reacted. When it turns out that the severed fingers are not Frederick's, the father seems to be right. Through Bille, the trail leads the detectives to Conny Kaiserling (Christina Große), who runs a studio for women's self-defense courses. Brix gets the idea to smuggle Fanny in there undercover. Janneke and Brix are called to the Taunus to a woman's body dumped there. Antonia Wagner, the dead woman, was apparently pierced by a fence post. Searching for foreign influence, the forensic examiner finds scraps of skin belonging to Frederick Seibold under her fingernails. Was Antonia involved in the kidnapping?

Shooting took place from early September to early October 2020 in Frankfurt, Dreieich, Usingen, Hofheim and Egelsbach. It is the first "Tatort" that the hr has filmed under corona conditions. Distance, masks and a functioning hygiene concept implemented by hygiene officers have been part of everyday filming ever since.