Back to normal: From Whitsun bus and train also at night again
from FFM Aktuell 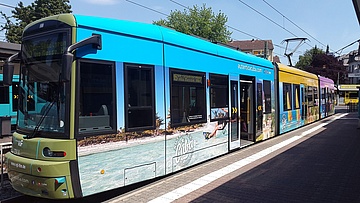 (ffm) As already announced by head of transport Klaus Oesterling, buses and trams in Frankfurt am Main will run again at night in time for Whitsun, i.e. from Friday, 29 May. Due to the Corona pandemic, night services had been suspended since March 20. At the same time, the two "leisure lines", i.e. line 83 to Lohrberg and the extension of line 45 along the Main to Kaiserlei, will start operating from Whitsun.

On bus services, however, the front door will continue to be closed and drivers will not sell tickets. Passengers without tickets are asked to use existing vending machines or mobile phone tickets, or to pull their ticket at the latest when transferring to the S-Bahn, U-Bahn or tram. A solution that bus drivers can also sell tickets in compliance with hygiene rules is in preparation.

RMV timetable information is up to date

On the RMV app, which is especially important for users of night transport, and on http://www.rmv-frankfurt.de passengers can find out about timetables and their connections. The staff at the RMV service telephone 069/24248024 are also available around the clock and will be happy to advise.

"I am pleased that we can at least return to normality in the local transport service," says Transport Director Oesterling. He appeals to all passengers, also in their own health interest, to wear the mandatory mouth-nose protection in buses and trains and to comply with the known hygiene rules. "I would particularly like to thank all those who have ensured in recent weeks that we have always been able to maintain a good local transport service in Frankfurt. First and foremost, of course, the drivers of the transport companies, who often enough put their own health concerns on hold for this."

The VGF has since resumed several services that could not be offered temporarily due to the pandemic:

- Since 4 May, the TicketCenter at Hauptwache station has been open on a conditional basis. The TicketCenter at Konstablerwache and Bornheim Mitte, the VGF was able to continue to operate without interruption thanks to the special construction.

- Also reopened are the info pavilion at the Hauptbahnhof tram stop,

- the information point on the underground platform in the direction of Südbahnhof at Hauptwache station,

- and the ServiceCenter at Bockenheimer Warte station, where it is possible to make an appointment to discuss matters relating to "Erhöhtes Beförderungsentgelt".

- The lost property office at Hauptwache station, open Tuesdays to Fridays from 8 a.m. to 12 p.m., was not closed at all, and the passenger escort service was also not closed.

Other offers of the VGF still await the return to normality:

- until further notice no operation of the Ebbel-Ex, neither in the regular, nor in the rental traffic,

- for the reopening of the transport museum in Schwanheim is currently still - analogous to other museums in the city - a concept is being developed,

- a use of the info bus is initially not planned.