BACK TO THE CINEMA: Cinema of the DFF opens on June 18
from FFM Aktuell 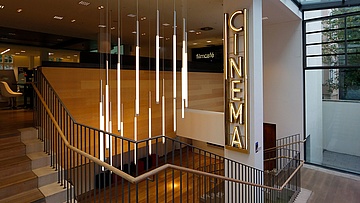 A few movie theaters have already opened, but most cinemas - and especially smaller movie theaters - remain closed so far. And that, although they are actually allowed to open. But due to the requirements of the state of Hesse, a play operation would not be economical - especially since there are also still no new films that could be shown in the cinemas. But that is about to change. Not only have some film distributors already announced new releases from the end of June. Also most of Frankfurt's art house cinemas want to resume operations from 02 July.

To shorten the wait for this, the cinema of the Filmmuseum DDF is already offering first screenings from 18 June. After a three-month closure, films will then be shown Thursdays to Sundays until 02 July. Together with other cinemas, it will then be "BACK TO THE CINEMAS" with a daily programme from the beginning of July! For the reopening, the program of the next two weekends in June picks up directly where it left off with the beginning of the Corona crisis and gives in three small film series first opportunity to catch up on failed cinema experiences.

"By far"the most beautiful: Film Culture at the DFF Cinema

Carefully curated films from all decades and in all formats will finally be back for cineastes to see in their original versions and on the big screen. For this purpose, the DFF has developed a security concept that ensures compliance with the required hygiene and distance rules with reduced seating. For example, the DFF cinema is legally obliged to record the contact details of cinema-goers in order to be able to track the possible spread of the corona virus. Masks are compulsory throughout the building, including at the entrance and exit to the cinema. Mouth/nose protection may be removed in the cinema seat during the screening. More info can be found at: https://www.dff.film/wiedereroeffnung

In addition to the outstanding and multiple award-winning program, moviegoers are likely to have missed the special atmosphere and communal film experience at the DFF cinema. In the House of Film on the Schaumainkai, visitors can enjoy film culture directly and be carried away, shaken and touched. With modern projection technology for all formats, the DFF cinema ensures the highest visual and acoustic quality.

Six months before his 90th birthday. Birthday Mario Adorf wished to be allowed to show those cinema works in the cinema of the DFF, which mean the most to him from his own oeuvre. Already in January, a small exhibition had opened in the foyer of the DFF, which will present Adorf's special mimicry and versatility through photos and other exhibits until the end of July.

In June, the DFF cinema will show a selection of the screenings that unfortunately had to be cancelled due to the pandemic-related closure.

The Act of Filming - Reflections on Cinema and Politics

.Whether for the dissemination and enforcement of particular ideologies or their subversion, whether for the formation of a collective identity or as a site for social discourse, the uses of film as a medium on the political battlefield are manifold.

The series presents a selection of films released in March and April that reflect on the relationship between cinema and politics and the accompanying questions around social and artistic responsibility and representation, finding new forms of artistic and political expression.