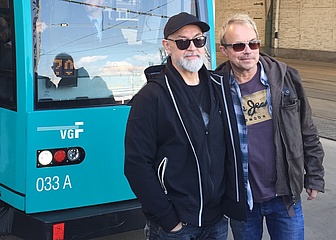 New CD and DVD of the cult duo

Henni Nachtsheim and Gerd Knebel are now for three decades as BADESALZ the figurehead par excellence for Hessian comedy. Their humour is bizarre, offbeat and yet very close to Hessian reality. With their live shows, comedy albums and even a feature film, BADESALZ have built up a loyal fan base that extends far beyond the borders of Hesse. Time and again, the duo allows themselves a creative break in order to pursue various solo projects. But Badesalz are not thinking of quitting. And so fans are now delighted with two new releases of the cult Hesse.

On DVD the great finale of their successful DÖ CHEFS tour is now released, recorded at the Capitol Mannheim. Instead of simply presenting their gags in the form of short sketches or classic stand-up comedy like many of their colleagues, Knebel and Nachtsheim have once again crafted a wonderfully quirky story around the individual numbers in this program, which premiered in 2014: Henry and Paul are the owners of two neighboring restaurants. They never miss an opportunity to vent about each other's culinary offerings or hygiene. But now "Paul's Texas Pub" and "Beim Henry" are threatened with demolition. The only way out of this threatening misery would be a merger. Instead of beef sausage at Henry's or meatballs at Paul's, there would be "Rinderdelle". But what could a joint restaurant look like? And what should it be called?

This is more or less the frame story of the program, in which the "Dö Chefs" also talk about tattoos, 3D printers or double Organa. Paul confesses his secret love for Andrea Berg in a song and Henry shows how an acceptance speech at the Oscars would sound in Hessian ("My father was a famous hand-cheese maker"). The viewer also learns how beef sausage and Handkäs can be described in true Goethean fashion.

In addition to the main program, which lasts about 103 minutes, the DVD offers impressions from a day of performances (about 2:50 min.), as well as four episodes of AsoTV on such important topics as big game hunting, pets, real wonders of the world (such as the kiosk in Griesheim) or "veganism". Together, these four clips last about 16 minutes. All in all, the DVD offers two hours of concentrated bath salt fun. And if you always wanted to know what a "Liescha" is, you simply can't miss this extremely entertaining program.

You can order the DVD DÖ CHEFS HERE

That's not all. After more than fourteen years, with MAILBOX TERROR, a new comedy album by Badesalz has finally been released. In 39 titles there is a reunion with well-known characters, like Kevin, the son of the headbanger, who has become a real rocker himself in the meantime. But there are also guest appearances by other artists such as Rick Kavanian with an Indian "babba" version, as well as Andreas Kümmert and Max Mutzke. The latter try their own interpretations of the song "Hessische Freundschaft", which is then also performed by Badesalz themselves. Other pieces are about comedy porn from the decommissioned Biblis nuclear power plant, a very special smoothie creation or eye lasers in the DIY store. But the listener also finds out what's in a forgotten bag or what really happened to Adam and Eve in paradise.

The CD is a successful mixture of absurdities and slightly exaggerated everyday situations, which are almost painfully revealing, as in the case of "The advantages of tolerant thinking". For fans, this CD is an absolute must!

You can order the CD MAILBOX TERROR HERE

Of course you can find more info about Badesalz at: www.badesalz.de