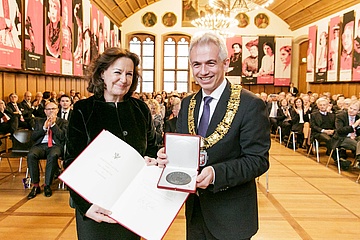 "People like you are a stroke of luck for our city," said Lord Mayor Peter Feldmann at the presentation of the honorary plaque in the Kaisersaal. "With your expertise and personal commitment, you have given Frankfurt a very human and friendly face as a financial and business location. The award of the seat of the European Central Bank and the title of European City are exceedingly closely linked to your personality."

His words are addressed by Feldmann to Gabriele Eick, a true Frankfurt personality. Born in Vogtland, she came to West Germany with her parents and sister shortly before the Berlin Wall was built. She trained as an insurance saleswoman - and aspired to more. In 1971, Eick joined IBM Germany, becoming director of sales partner business. Later she worked as Marketing Director Europe for a large market research institute and studied in New York. At the beginning of the 1990s, Eick became managing director of the Frankfurt Economic Development Agency, which was then freshly converted into a limited liability company.

Mayor Feldmann continued in his laudatory speech: "The situation was not easy at the time. Economic downturn, drugs, crime - Frankfurt was struggling with a negative image. Nevertheless, the mayor at the time, Andreas von Schoeler, wanted to bring the European Central Bank to Frankfurt and commissioned the Economic Development Department to run a Central Bank campaign. This meant that you, Gabriele Eick, were faced with a mammoth task."

Eick and her team mastered it: Frankfurt prevailed over cities such as Paris, London and Luxembourg in the negotiations in Brussels and became the seat of the ECB. After her coup, Eick switched to the free economy, founded her own management consultancy, stood and still stands at the head of various business associations and clubs.

Gabriele Eick is also involved in the social and cultural spheres, including for the Weltkulturen Museum, the Frankfurt Rhine-Main Business Association, the PLAN Children's Charity Foundation, the Rheingau Music Festival. In addition, she advises the ECB on the European Culture Days, which will take place for the 16th time in 2018.

"You yourself describe your time at the Economic Development Agency as your elixir of life. You talk about how this job has given you so much. We say: You have given us so much! For this, I thank you today on behalf of the City of Frankfurt am Main with the Badge of Honour."

Gabriele Eick was very honoured by this award and said that such an appreciation was both an incentive and motivation for her to continue to work for the city in which she was not born, but which she has long regarded as her adopted home. "Home at the end of the thought always make the people and in this point Frankfurt is a very special civil society, which is tolerant, curious and international", said Eick