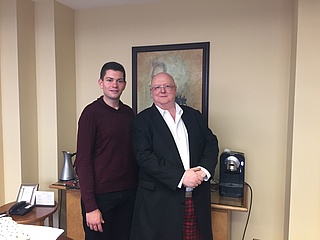 It's going to be an exciting year for Bäppi La Belle. The Frankfurt cult figure is celebrating its 25th anniversary in 2018. On June 2, there will therefore be a big gala concert at the Capitol Offenbach, where there are not many songs to hear that have accompanied the popular artist through his life. The audience will also be treated to a truly spectacular reunion with characters from the last 25 years - from Uschi to Angela and Lisbet. Here Bäppi has come up with something very special: He will soon be shooting a short film based on James Bond, in which all his cult characters will be allowed to appear. And other Frankfurt personalities will also be involved, including former mayor Petra Roth as M. This is guaranteed to be a particularly amusing introduction to a glamorous show, for which <link https: www.frankfurtticket.de tickets _blank>Tickets can now be ordered HERE.

However, the anniversary show is admittedly not the only highlight Thomas Bäppler Wolf has in his busy schedule this year. In addition to the recordings of his Internet TV show "Lieber Blau als gar kein Bock" (<link https: www.frankfurt-tipp.de specials lieber-blau-als-gar-kein-bock.html _blank>all info can be found HERE) and the new Bäppi show in the Theatrallalla, which is scheduled from April, he also offers his audience some interesting culinary highlights. In addition to the popular Thermomix show (whose dates are regularly sold out in no time at all), these include for the first time very special cooking classes at the InterContinental Hotel. Here Lisbet Windsor invites you to a culinary journey through the Commonwealth. Together with chef Klaus Bramkamp, Her Majesty will conjure up a 3-course menu with the course participants. Planned are dishes from England, Canada, South Africa, Australia, India or Hong Kong. For 109 &euro; per person there is the cooking course, the menu and corresponding drinks. Initially, five dates are planned for 2018: February 22, April 24, June 26, October 18, and December 11. As classes are limited to a maximum of 30 participants, those interested should register quickly through the <link http: www.theatrallalla.de _blank>Theatrallalla Theater or through the InterContinental.

If you're not much for cooking but never get enough of a good Stöffche, don't miss the Great Cider Olympics on May 11. Six different ciders will compete against each other. Accompanied by a Hessian menu and a show program, visitors can participate in this cider tasting for 59 <x>ampersand</x>euro; and have a say in who will be awarded the winning Fichtekränzje. <link https: www.frankfurtticket.de tickets die-apfelweinolympiade-8915.25169 _blank>Tickets can be ordered HERE.

You think that's all there is to it? Of course not, because Bäppi has a lot more planned for 2018. For example, there will be revivals of the hit productions "Die Fledermaus" (April 09 - 19) and "Das Haus in Montevideo" (December 26 - 30), as well as new plays: Thus, from March 14 - 21, "dreist nach Kleist" the comedy "Der zerdepperte Bembel" will be performed. With Marcel Schilling's very free adaptation of the classic "Der zerbrochene Krug" by Heinrich von Kleist, Bäppi is fulfilling a real dream for its 25th anniversary. In August there will be a new parade role for the Frankfurt original: In "Miss Moppel - 16:50 to Offenbach" Bäppi will follow in the footsteps of Agatha Christie. If that goes down well with the audience, there will be plenty of material for more "Miss Moppel" plays.

In November, things will get monumental at the Theatrallalla, when "Ben Hur & the Rats of the Racecourse" will be performed here. Similarities with socio-political events of recent months are of course purely coincidental and completely unintentional - honest!

A children's musical for the whole family in June and October, the collaboration with Alexander Beck from the Alte Brücke Theatre as "The Fat Pack" and a comedy reading of the "Ring of the Nibelung" are also still in the bulging diary of Bäppi's anniversary year - not to forget that Thomas Bäppler-Wolf is also a city councillor. One thing is quite clear: it will never be boring with him and ideas are still there for the next 25 years. Therefore we say: Congratulations on the anniversary and here's to the next quarter century of Bäppi La Belle!

<link http: www.theatrallalla.de _blank>You can find more info about the plays, the times and the tickets HERE