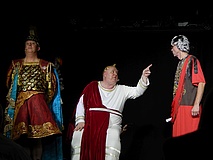 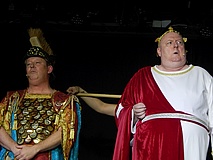 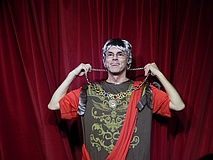 Just recently Bäppi la Belle celebrated a roaring premiere at Kinopolis with his Bond parody "Specktre". The short film, which was shot in and around Frankfurt in the summer with a lot of celebrity support, was a real passion project, which was appreciated by the premiere audience with a lot of hearty laughter and even more applause. If you missed the premiere, you can watch the film at the Theatrallalla, <link http: www.theatrallalla.de portfolio specktre-der-film _blank>Where it will still be shown on a few evenings. There you can also buy the CD Bäppi recorded to accompany the film: "Bäppi sings Bond" includes not only the "Specktre" theme song "Sinnlos", but also Bäppi's versions of some real Bond classics like "Goldfinger", "Diamonds are forever" or "Nobody does it better".

And that's exactly what many fans think about their Bäppi when it comes to weird comedy. And that's what they got again less than a week after the glamorous movie premiere, when "Ben Hur and the Rats of the Racecourse or: The Count's Best Play" celebrated its world premiere at the Theatrallalla Theater. Like "Specktre", the musical comedy has a strong Frankfurt connection. And something else is special: It was the last premiere at the Theatrallalla before the charming theatre will close its doors in May next year.

In the play, all the hustle and bustle of recent years around the racecourse area, which has at times taken on bizarre-absurd features, is processed. And of course in the usual irreverent, colourful and very shrill Bäppi style. When the consul of Niederadus, Philipus Solmus, wants to build a Circus Maximus on the grounds of the holy rats of Niederadus, which is to be even bigger than the one in Rome, Ben Hur, the guardian of the holy rats, runs up a storm against the plans, whereupon he is arrested. Although his resolute mother succeeds in freeing him from captivity, this does not save the site, on which a training academy for vestal virgins and virgin gladiators is also to be built. This will require the help of Petrus Feldmannus, the Stadtholder of Frankofortum, from whom Solmulus would like to wrest his beautiful chain of office. But it will take an elaborate plan to stop Solmulus.

Who knows a bit about Frankfurt's city politics, will of course immediately recognize, who is taken here sometimes very charming, but then also quite biting on the target. Here really everybody gets his fat away cross-party. In addition to the haggling over the racecourse, more current topics such as the AFD or the diesel driving ban - in this case a ban on horse droppings - are also made fun of. And then there's a certain "blonde Bernadette".

But you don't have to be a Frankfurter to have fun here. Because in the end the story only serves as a scaffolding for weird comedy interludes with clear bows to Monty Python or Louis de Funes. And of course, Bäppi is not without its numerous musical numbers. Here, for example, "American Pie" becomes a swan song to childless times or the hit song "Aber dich gibt's nur einmal für mich" (But you only exist once for me) becomes a love song to an official chain.

Bäppi himself knows that his humor is sometimes very special. For example, he commented on a scene that caused particularly loud laughter among the premiere audience with the words: "What do we have to bring on stage here so that you find it sh." His audience just thanks him for not trying to pander to the feuilleton, but always staying the way his fans love him: snappy, shrill and funny. If you liked plays like "Cleopatra and the Curse of the Temple Whores," you'll have a blast with this one, too.