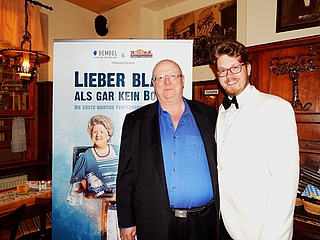 Oh yes, what times were those when Heinz Schenk, together with Lia Wöhr, supported by Reno Nonsens, brought Hessian dialect and our very special hospitality into living rooms all over the country with their show "Zum Blauen Bock". The last episode ran in 1987 and there is still no worthy successor. But that will soon change. Because Frankfurt's popular travesty artist Bäppi la Belle is bringing a similar concept to (Internet) TV this year with the title "Lieber blau als gar kein Bock" ("Better blue than no goat at all"). Together with Bembel GmbH - Agentur für Reklame, Bäppi has developed the new show. Instead of presenting a different city in Hesse in each show, as Heinz Schenk once did, "Lieber blau als gar kein Bock" will focus on a cider tavern from Frankfurt or the region. Here, the show will be recorded with various guests from culture, politics or city events.

"I want to introduce people who everyone knows, but about whom you know nothing," Bäppi said at the press conference. In other words, people who you meet again and again in Frankfurt, who shape our cityscape, but who are still largely unknown. Overall, the show is intended to be an entertaining mixture of entertainment and talk show. With music, comedy and regional flair. Bäppi himself will lead through the show as hostess Lia, the role of sidekick has been taken over by Thomas Isser, the 2nd chairman of the Offenbacher Karnevalverein. For the musical accompaniment is - as in Bäppi's shows - Gabriel Groh responsible.

Synergy Films will record the pilot show at the Schönen Müllerin at the end of October. The show is then expected to be available via YouTube in early December. The first official episode will then be recorded at Zum Rad cidery on Jan. 22, 2018. In February, it will then go to Zum Grauen Bock and in March to Lorsbacher Tal in Sachsenhausen. For the audience, which of course will also be included in the lively events, the guests of the respective evening should be a surprise. But one can be betrayed already: It will be a very colorful mix each time, appealing to different age groups. We are excited and look forward to the pilot episode in December!