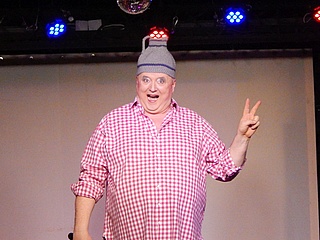 In the small cabaret theater in the Nordend it is again so far: Bäppi La Belle presents since last week a new show. After Bäppi had himself accompanied live by the young pianist Gregori Dörr in the last two programs and thus steered his shows in a somewhat new direction, "Hessisch fer Aafänger" now returns to the tried and tested format. And since not only the loyal regular viewers are to be addressed, but also many new fans are to be infected with the Bäppi virus, the show offers a colorful potpourri of new and cherished classics. So for newcomers there are some of the most popular gags and songs from past shows - which Bäppi comments on delightfully self-deprecatingly with a "Can you really still hear that?". And for fans who don't miss a show, there is of course a lot of new material. The title of the show offers the red thread of course. So the whole thing starts, after the obligatory opening film, with a song that makes use of the most striking line from Friedrich Stolzes Frankfurt poem - "es will merr net in mein Kopp enei, wie kann nor e Mensch net von Frankfort sei!".

After that Bäppi tells about his childhood in Griesheim, pays a visit to the shop of "Tante Maria" again or enlightens the audience about the history of local delicacies like the Frankfurter Kranz or the Frankfurter Würstchen. Hessian dialects are spoken and sung about, the audience's knowledge of green sauce is tested or a work by the immortal Heinz Schenk is recited. All this, of course, again in changing costumes, from the apple wine hostess to a traditional costume from Schwalm-Eder to the Bembel cap.

But Bäppi wouldn't be Bäppi, of course, if there weren't also plenty of hearty Hessian slander. Apart from the overflowing political correctness and the new US president, there are, for example, Saturday bottle returners, payment terrorists at the supermarket checkouts or the "free beer faces", who are regular guests at the usual events of the city, who get their fat. Bäppi even dedicated his own song to the latter, which created a very good mood among the audience at the sold-out premiere.

"Hessisch fer Aafänger" is exactly what the audience expects from a Bäppi La Belle show. Funny, sometimes a bit evil, politically incorrect and always nice and weird. You can laugh about it even if you are not from Hesse. So, do not be put off by the title, there is no adult education course in Hessian here, but an enjoyable evening between cabaret and travesty, which once again proves why Bäppi is a real Frankfurt original. <link https: www.frankfurt-tipp.de veranstaltungen s event hessisch-fer-aaafaenger-1.html _blank>Alles weitere zur Show und die Spielzeiten erfahr Ihr HERE in unserem Veranstaltungskalender