Bäppis Couchgebabbel goes into the next round
from FFM Aktuell 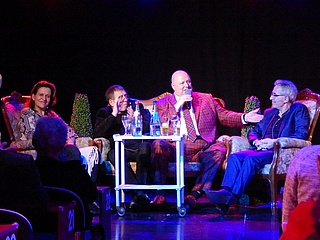 A few years ago Thomas Bäppler-Wolf started the humorous talk show "Bäppis Couchgebabbel" in his Theatrallalla. The show was very well received by the audience. During its run, it provided many a memorable moment, for example when politicians such as former Lord Mayor Petra Roth or Science and Arts Minister Boris Rhein, who once learned to dance from Bäppi, took a seat on Bäppi's couch. But even though the feedback was very positive, Bäppi put an end to his couch babble more than four years ago. The main reason for this was the fact that over time a number of very similar events were offered in the city, which meant that the special character of the Couchgebabbel got a bit lost. And one did not want to offer always the same faces to the audience on the couch then either.

After a long, but also healthy break, the comeback of the Couchgebabbel came in early 2017 with a slightly revised concept. From now on, usually three guests will sit next to Bäppi on the couch. There should always be a colorful mix of culture, politics and public life, which should also sometimes ensure that the discussions are a little more intense. This intention worked out perfectly right from the first edition, when SPD member of the state parliament Turgut Yüksel and concert promoter David Lieberberg discussed German hip hop music intensively, with the third in the bunch, "Grüne Soße Festival" inventor Maya Wolff, as a sort of mediating voice of reason.

The guests are first introduced in individual interviews before sitting together on the couch to discuss a wide variety of topics. Of course, it remains largely humorous, as one is just used to in the Theatrallalla. But it also gets deep, serious and heated. Based on the first issue, this new version of the Couchgebabbel is a complete success. Every three months there will be a new edition. The next one will take place on June 18. Then Armand Zorn from the SPD, the artist and sculptor Gabriele von Lutzau, who once became known as "The Angel of Mogadishu" as a stewardess during the hijacking of the LANDSHUT by a Palestinian terrorist commando, as well as Boris Meinzer, the "Dummfrager" from FFH will sit on the couch. They are again very different guests, but all have exciting stories to tell and are guaranteed to have rousing discussions.

Musically, the evening will be accompanied by Gabriel Groh and the Theatrallalla Band

The audience is asked to bring, in addition to a good mood, a little pet food, which will then be donated to the Tiertafel Frankfurt, for which Bäppi has been working hard for a long time. A tin of cat or dog food is already enough as a small contribution. Because the institution, which helps people who are not doing so well financially to feed their beloved animals or to provide them with medical care, is really dependent on every kind of help. So not only will you be well entertained while couch babbling, you can do some good with your visit to Theatrallalla. So, secure tickets, buy some pet food and then off to Bäppi's Couch!

You can also find more info HERE in our event calendar