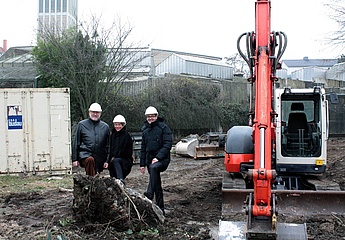 (kus) With a first “excavator bite“ the construction work for a new penguin facility at Frankfurt Zoo began on Tuesday: On an area of almost 2,000 square metres in the middle of the zoo, a spacious facility for Humboldt penguins is being built, creating a new attractive visitor area with a high quality of experience and stay. Together with zoo director Prof. Manfred Niekisch, Ina Hartwig, head of the culture and science department, and Jan Schneider, head of the building department, gave the starting signal for a construction project that is trend-setting for the future of Frankfurt Zoo.

The excavator rolled on the site of the future penguin facility and around 50 guests celebrated the symbolic start of construction of the large-scale project at the zoo. „You couldn't have given the zoo a better gift on St. Nicholas Day - the city of Frankfurt is investing in the future with the construction of the new penguin facility. In order for Frankfurt Zoo to continue its scientific successes in preserving the world's biodiversity and to remain the most visited leisure facility in Frankfurt as a visitor magnet, this new building is a logical step“, City Councillor Ina Hartwig emphasized the importance.

City Councillor Jan Schneider added: „The new penguin facility is also very exciting structurally and visitors to the zoo will be able to experience the animals in a completely new way in the future. You can meet the penguins at eye level. Young and old will not only be able to watch the eager swimmers through underwater windows in their grotto, but will also be able to climb up a barrier-free ramp from there. There the visitors will find themselves in the middle of the penguin colony. You then look at a wide landscape - consisting of sandy areas, water surfaces and artificial rocks. In order to stabilize the necessary underground concrete structure, so-called micropiles are required for anchoring. If there were no water in the system, the whole structure would float up like a ship.“

The new system is designed for the contemporary and species-appropriate keeping of a Humboldt penguin colony of 30 to 40 breeding pairs. Humboldt penguins live on the Pacific coasts of northern Chile and Peru. They cope very well with the Frankfurt climate, so they can be kept all year round on an outdoor facility - this saves energy for expensive cooling. The new facility will not save space for the animals to swim, dive and breed.

The construction project with a total cost of 7.2 million euros, due for completion in 2018, is the largest development step since the opening of the new facility for spectacled bears and howler monkeys, Ukumari Land, 2013. The 30 million euro investment programme that the city councils decided on for Frankfurt Zoo in 2008 has now been completed. “I asked the zoo to work with me on the basis of a master plan to be developed to determine the concrete need for action for the aging animal houses and to meet the future requirements of a modern, contemporary zoo with an overall concept“, said City Councillor Hartwig.

City Councillor and Zoo Director agree that there will be no long breathing: “We are working flat out to develop further sections of the zoo's grounds and thus advance its expansion into a modern nature and species conservation centre. In addition to necessary remediations, concepts for the keeping of African large animals, i.e. giraffes, rhinos, hippopotamuses and okapis, are now being developed.“]