Bahnhofsviertelacht 2018 - An evening under the motto "Ankommen"
from FFM Aktuell 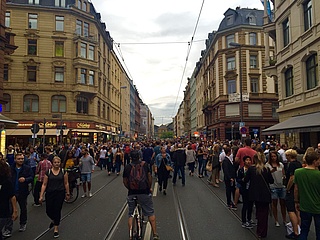 The Bahnhofsviertel is a quarter of contrasts. It is a quarter full of surprises, full of stark contrasts, full of secrets and full of creativity. Once a year the quarter presents itself with all its facets and attracts many thousands of people from all over Frankfurt and the region. For Oskar Mahler, a resident and activist from the Bahnhofsviertel, it is clear what makes the quarter so fascinating: "The Bahnhofsviertel is the heart of Frankfurt. That's what makes this district so special. Here you are right in the middle of it. I've always had the opportunity to leave. But I am at home here!"

On Thursday, August 16, between 6 p.m. and midnight, there will be exclusive behind-the-scenes looks at businesses and institutions located there. Under the motto "Arrive", this year numerous residents of the Bahnhofsviertel will also describe how it is to live in the spatially smallest and most turbulent district of Frankfurt. This is a real special feature that Lord Mayor Peter Feldmann is very pleased about: "People make a district what it is - and in this case, the most diverse district in Frankfurt," says Feldmann at the presentation of the programme.

In order to relaunch the Bahnhofsviertelacht programmatically, the event has been given a new concept, a new Internet presence and a new design. "The Bahnhofsviertelnacht is a self-runner that has long since ceased to need to be advertised. But we wanted to use the opportunity to also draw attention to problems such as displacement effects and rising rents in the district. In order to implement sustainable changes in the Bahnhofsviertel, we as the city administration are dependent on the help of residents and actors from the district. We can't do it without them. We know that very well," said Feldmann. He praised the commitment of the many volunteers who not only make the Bahnhofsviertel night possible, but also work for the district during the rest of the year.

Thomas Feda is managing director of the city's Tourismus+Congress GmbH, which organises the festival. He says: "We are doing everything we can to ensure a safe and peaceful Bahnhofsviertel night again this year. This event has been one of the highlights of Frankfurt's calendar of events for years. From there, it is a matter of course for us that visitors to the Bahnhofsviertel can enjoy themselves and look around the district with a safe feeling on 16 August."

Also this year, during the Bahnhofsviertel night, the traffic of tram lines 11 and 12 will be temporarily interrupted at the level of the Bahnhofsviertel. The stops Weser-/Münchener Straße, Hauptbahnhof/Münchener Straße (both tram lines 11 and 12) as well as Taunusanlage, Hauptbahnhof/Karlstraße and Weserstraße (bus lines 64 and n8) will not be served between 4 pm and 3 am. Instead, the trams/buses will stop at other stops in the vicinity or at replacement stops.

You can find the new website and the complete program at: Http://bahnhofsviertel-ffm.de