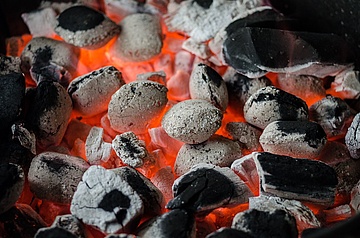 Whoever was hoping to be allowed to fire up the grill again after the little heat respite, which yes, has also been accompanied by some rain, is going to be disappointed: Barbecuing on all public barbecue areas in the city of Frankfurt am Main remains prohibited. The reason for this is that the rainfall was too low to sufficiently soak the ground. So not only is the soil still too dry. In addition, according to the weather forecast, temperatures are expected to climb back above 30 degrees this weekend, and further rain is a long way off. Forest fire level three to four is expected for Frankfurt.

The ban therefore applies unchanged to both wood and coal-fired grills as well as camping, gas and electric grills. The use of shishas, which are operated with glowing coal, is also prohibited. In parks and public green spaces, including the Mainufer, in the Grüneburgpark or in the Niddapark, barbecues and open fires are generally not allowed.

Please also in the Frankfurt city forest to keep a prudent behavior. Because there the forest soils, ground vegetation and fallen leaves are extremely dried out and easily flammable. Even a discarded bottle or a carelessly flicked cigarette butt can be the cause of a forest fire! Smoking and open fires are generally not permitted in the forest. This applies within the framework of the now issued barbecue and fire ban also for the barbecue areas at the forest playgrounds Schwanheim and Scheerwald.

The ban applies until further notice, until it is actively lifted by the green space office via the media again.

Further information is available at the green space office under telephone 069/212-30991. Also tips to possible sources of danger can be communicated over this phone number. The barbecue ban is controlled by the public order office.

You can find more information HERE