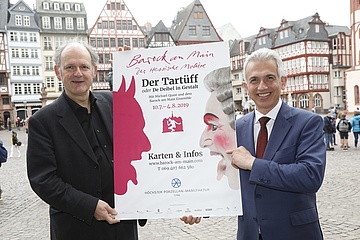 For many Frankfurt residents and theater enthusiasts visiting from the region, it is one of the great highlights of the city's summer cultural calendar: the "Barock am Main" theater festival. This year, the poet and co-founder of the festival, Wolfgang Deichsel, would have turned 80. Therefore, "Baroque on the Main" 2019 is all about the memory of the "Hessian Moli&egrave;re". From Wednesday, July 10, a new production of "Der Tartüff - De Deibel in Gestalt" will be shown in the courtyard of the Höchster Porzellan-Manufaktur. Lord Mayor Peter Feldmann presented the programme together with theatre-maker Michael Quast on Wednesday, 22 May: "Baroque on the Main is a household name far beyond Frankfurt. This year, with the Tartüff, written by the Hessian Moli&egrave;re Wolfgang Deichsel, a play is shown that is centuries old, but could not be more contemporary. For hypocrites like that Tartüff, they still exist among us humans."

This summer's festival is also a foretaste of another cultural highlight in 2019, because Michael Quast and his team still have big things in store: in the autumn, the opening of a new theatre, the Volksbühne im Großen Hirschgraben, is to be celebrated. "I am grateful to Mr Quast and his whole team for helping the dialect in Frankfurt to blossom again - and for putting a lot of heart and soul into building up their new theatre. It will soon be impossible to imagine Frankfurt without the Volksbühne," said Feldmann. Michael Quast added: "Wolfgang Deichsel's Hessian version is a great pleasure - for the audience as well as for us actors. We can look forward to the best entertainment and stimulating summer evenings!"

The play is about the rich citizen Orgon, who finds the support and peace of mind he is missing in his life through a pious man named Tartüff. Orgon does not want to know that Tartüff's virtuousness is only a mask behind which an unscrupulous deceiver is hiding. He even offers the hypocrite his daughter as a wife, although she is already engaged. Worse still, the deluded Orgon not only signs over his entire fortune to Tartüff, he also gives him a box of explosive political papers for safekeeping. The family is threatened with total ruin. Only when Elmire, Orgon's wife, literally shows him that Tartuffe has dishonourable intentions towards her, does Orgon's adoration turn to desperate rage. But it already seems too late.

For more info and tickets, go to: https://www.barock-am-main.com/