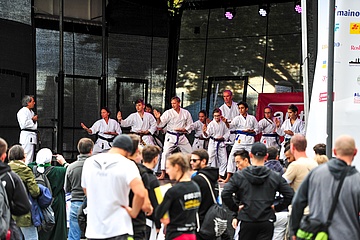 At the end of September, the "European Week of Sport" (23 to 30 September) will once again take place. There will already be a sporting introduction to this on Saturday, 11 September, in the middle of the city - more precisely in the MyZeil shopping centre. Here, the 42-metre escalator will be transformed into the "sportiest escalator in Europe" and a stage for sport, when MyZeil welcomes the Frankfurt Sports Circle to a unique campaign.

Under the motto #BeActive, there will be exercise offers, competitions and information on the Europe-wide exercise campaign for visitors on this day. One of the challenges will be to climb the longest escalator in exactly the time you estimate. With a bit of luck and skill, an "award ceremony" awaits at the finish line. From 2 p.m., a flash mob is planned, which will additionally draw the attention of MyZeil guests to #BeActive and the wide range of offers that clubs will be offering to try out from 23 to 30 September.

A sports talk on the 4th floor of the MyZeil shopping center will focus on the expiring summer of sports, in which not only the Olympic and Paralympic Games were on the agenda. There will also be a preview of the "European Week of Sport". The Frankfurt-based sprinter Lisa Mayer and the successful coach Günter Eisinger will take part in the talk. Lisa Mayer has achieved her greatest successes to date with the 4x100-meter national relay team (including gold at the 2017 World Athletics Relays and the 2016 European Championship bronze medal). In his long career, Eisinger coached numerous top track and field athletes on their way to Olympic Games as well as World and European Championships.

The Sportkreis Frankfurt and clubs from the city and the region are offering many free things to try with the "European Week of Sport" in September. Special theme days and focal points are aimed at different age groups. The starting signal is given on 23 September. Until 30 September, a varied programme is designed to whet the appetite for regular exercise, especially for newcomers and those who are already active in sport. The offers can be found at: https://beactive-frankfurt.de/

Also the "FamilienSportFest" of the sports circle is part of the movement campaign this year and will take place on September 25 in the Fabriksporthalle in Fechenheim. And the non-club sports scene is participating in #BeActive, for example, with open basketball tournaments in the Hafenpark at the ECB.

Sports clubs can use the "European Week of Sport" to draw attention to themselves and their offerings. Registration is possible online at any time. "Thanks to the support of the clubs and the many participatory offers, #BeActive Frankfurt was already a great success in 2020 during the pandemic," says Amir Jemour, Head of Events at the lead Sportkreis Frankfurt. "We are taking the experience from last year with us and want to organise an event this year that is as Corona-compliant as it is attractive."