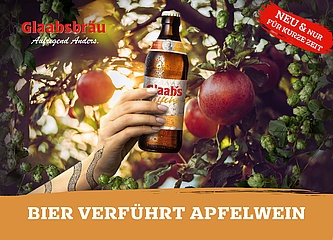 Already last year, creative brewmaster Julian Menner started the product development of the beer-cider hybrid. "The Glaab&acute;s Stöffche is a tribute to our region Hessen with its unique cider culture. Here we do not mix our beer with cider, but ferment apple juice, from apples of regional meadow orchards with our cult beer Glaabsbräu Helles," says Menner about this particularly tasty creation. And brewery boss Robert Glaab adds: "We have already tested our Hessian brewing speciality in cask at various events in 2019, such as the craft beer fair in Mainz. The feedback has exceeded our expectations. Despite the Corona crisis, we decided not to postpone the launch and hope that it will bring joy to many consumers during this difficult time. Reflecting on regional products and the regional cycle is more important than ever."

The regional brew tastes especially good with hand cheese and asparagus. Glaab&acute;s Stöffche is available in the Euro bottle 0,33L in the trade - and also in the gastronomy, as soon as they are allowed to reopen. With this "Stöffche" Glaabsbräu expands your craft beer range to five craft beers by now. Since "Glaab`s Stöffche" is only available for a short time, you should try it right away.