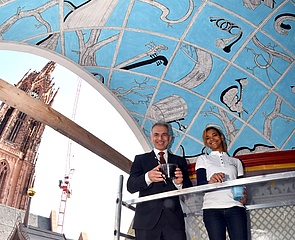 (ffm) Visitors to Frankfurt's new Old Town have been strolling through the alleyways and along the historic Coronation Walk since May. Their path also leads them past the "Golden Scales". Opposite the cathedral, in the south-east of the new quarter, the Renaissance house with its magnificent façade, originally built around 1619 by the Dutch religious refugee Abraham van Hamel and his wife Anna van Lith and reconstructed in the course of the DomRömer project, is already attracting many glances. Mayor Feldmann provided information on the current status of the work, in particular the completion of the Belvederchen, at a press event on Friday, November 16.

"I am pleased to be able to present to you today the completion of the so-called 'Belvederchen'," said the Lord Mayor. On the ground floor of the Golden Weighing House, restaurateur Birgit Zarges will in future operate a confectionery with Caf&eacute;. On the upper floors, the Historical Museum invites visitors to see the living quarters of the house, furnished and equipped as they would have looked in the early 17th century, when the Golden Weighing House was built. The Goldene Waage had been owned by the City of Frankfurt since 1899. From 1928 onwards, the Historical Museum restored the building as an example of a historic town house. The basis for this was the inventory list drawn up after the death of Anna van Lith in 1635.

According to architect Prof. Jochem Jourdan, the starting position for the reconstruction of the building was favourable. Thanks to the notoriety of the Golden Scales, numerous watercolours, drawings and sketches made at the end of the 19th and beginning of the 20th century existed, as well as photographs of the east wing and the main building. They provided information about the room sequences, building decoration and the constructive structure of the building. The stucco ceiling, now completed, is also a magnificent feature of the building.

However, the detailed reconstruction of the Golden Scales was a great challenge, which was only possible with qualified craftsmen and a good planning performance, said Jourdan. The half-timbered construction in the upper storeys alone, with the rich decorative forms in the parapet fields, was a masterpiece of craftsmanship. For example, tendril work was carved into the corner posts of both half-timbered storeys and then painted. The work on the Main sandstone on the ground floor, which is typical of Frankfurt, was also elaborate and had to be carried out with great precision.

In the interior of the building, visitors will also find this special material: a stair tower made of Main sandstone leads to the upper floors all the way up to the "Belvederchen", a leafy roof garden with a large gazebo and a small fountain. As Mayor Peter Feldmann explained, this is a typical design feature of the former old town. "Those who wanted to escape the hustle and bustle of the alleys for once found a welcome retreat on the airy roof terraces, with the best view over the quarter and of the cathedral."

The Belvederchen will be accessible to visitors to the museum once it opens.