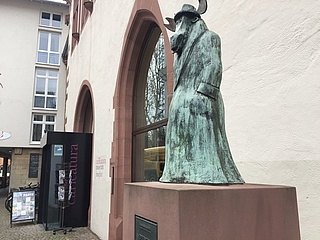 After the great success of the TITANIC exhibition, there is now another retrospective in the Caricatura Museum that is well worth seeing. This time, the last decade is looked back on in a humorous way - by means of cartoons from the volumes published so far of the book series "Beste Bilder", which was launched ten years ago. The series quickly became a success. While 70 cartoonists contributed works for the first volume, new names were added year after year, so that in retrospect some 90 artists filled the pages with a total of over 3,000 comic drawings. The editors now receive over 2,000 submissions per volume, from which they then select the "best pictures" in the truest sense of the word. These are not only a chronicle of the times, they have also served as the basis for the German Cartoon Prize since 2016. No wonder that participation in this series is so coveted by both established artists and young cartoonists - even if they can only be paid a very small fee.

For the editors Dieter Schwalm and Wolfgang Kleinert, it is an honor to be able to show this anniversary show at Frankfurt's Caricatura Museum. They say the exhibition not only depicts the political, social and sporting events of the last decade in a humorous and sometimes mercilessly nasty way. It also shows how much the cartoon landscape has changed in recent years. "In the last ten years, the drawings have become much more political," Schwalm said at the press conference. He added that it was also positive that more and more women were submitting cartoons. The number of young cartoonists had also increased. Kleinert added: "It was important to us from the beginning that new people and therefore new styles are always added."

It is then the stylistic as well as thematic diversity that makes this exhibition and the accompanying book "10 Years of Best Pictures" published by Lappan Verlag so successful. Sometimes one can laugh here about particularly formative events or also about very simple everyday situations. Sometimes, however, the finger is unerringly put into social wounds, so that here and there the laughter gets stuck in the throat. On display are a total of 274 cartoons, including 222 prints on paper, 26 drawings on paper, 12 prints on kapa, 10 prints on forex, 2 paper collages, 1 print on canvas and 1 painting by a total of 81 artists, including Bettina Bexte, Gerhard Glück, Katharina Greve, GerhardHaderer, Rudi Hurzlmeier, Til Mette or Stephan Rürup.

Whether the Google surveillance mania, the refugee problem, the rise of the AFD, the annoying vuvuzelas at the World Cup in South Africa, the still unfinished capital city airport BER, the climate debate, Donald Trump, the serious attack on the satirical magazine Charlie Hebdo or the death of Loriot - what has moved people in the last ten years is addressed here. It's wonderfully funny, but also very thought-provoking in parts. A really worthwhile exhibition, which can be seen at the Caricatura until 14 June. By the way, the extensive book on the exhibition is available for an unbeatable 20 euros!

You can find all further information at: www.caricatura-museum.de