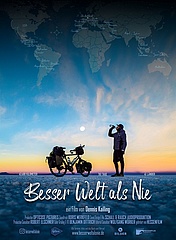 From Hesse to the wide world: The documentary BESSER WELT ALS NIE tells the story of Dennis Kailing, who circumnavigates the world on a bicycle within two years. With the question 'what makes you happy', but no experience in bicycle travel, the 24-year-old from Gelnhausen (Hesse) jumps into the deep end and just goes - always heading east. He is on the road alone, but he is rarely really alone. Many encounters with interesting, crazy or even "normal" people give him insights that remain withheld as an ordinary tourist.

Besides breathtaking landscape shots and a certain amount of wit and irony, "Better World Than Never" but also shows the unpleasant sides of a long bike trip: Never-ending rain in the Andes of South America, sickness between golden pagodas in Myanmar and loneliness in the endless expanses of the Australian outback.

After cycling 43,600 kilometres in 41 countries on 6 continents and circumnavigating our planet, Dennis returns from the west to the place from which he set off east a good two years earlier. At the end, he is his question 'what makes you happy' also a little closer - mostly it is just a very simple, tiny, but completely natural thing.

On Thursday, 13.02. at 20.30 clock, the film will be shown in the Harmonie in Sachsenhausen in the presence of the director and protagonist. Afterwards there will be an audience discussion. You should not miss that. More info can be found at: https://www.besserweltalsnie.en/movie