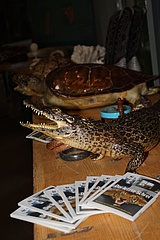 Coral jewellery, live reptiles, ivory carvings or snake wine - the nature conservation organisation WWF and Frankfurt Zoo warn against illegally importing souvenirs of protected animal or plant species into Germany. Especially during the winter months, the main travel season for exotic regions such as Latin America or Southeast Asia, the knowing or unknowing smuggling of species becomes a problem. To prevent travellers from picking up the wrong souvenir out of ignorance, WWF has published a new souvenir guide for your pocket. A traffic light system classifies the various souvenir groups according to the current regulations of the Washington Convention on International Trade in Endangered Species of Wild Fauna and Flora (CITES) and provides a quick, uncomplicated overview.

According to the zoo and WWF, illegal trade is one of the biggest threats to endangered species and can have serious consequences for holidaymakers. Last year, for example, customs seized more than 580,000 protected animals, plants and goods made from them. The following applies: ignorance does not protect against punishment. Tourists with prohibited souvenirs in their luggage face fines or even imprisonment. "Holidaymakers endanger the populations of endangered species by collecting or buying souvenirs, often out of ignorance. With the guide, WWF wants to prevent people from reaching for illegal souvenirs and prevent holidaymakers from committing a criminal offence by importing them," explains Jörg-Andreas Krüger, Head of Biodiversity and Species Conservation at WWF Germany.

But not only products but also live specimens are smuggled. At Frankfurt Airport alone, one of Europe's most important hubs, more than 3,700 plants and over 4,600 live animals were confiscated in 2015. The latter often end up in the quarantine station of Frankfurt Zoo. "It is appalling under what appalling circumstances and in what miserable conditions animals are picked up. We have received snakes from customs that had been on their way from Argentina to Germany for four weeks in a postal parcel, as well as rare Mexican tree crawlers that were more dead than alive in the transport case and even gave birth to young," complains zoo director Professor Dr. Manfred Niekisch. "You could say that in the illegal animal trade there is nothing that does not exist."

Also on photos with supposedly tamed wild animals, such as in so-called tiger temples, should be avoided. "In many facilities in Asia, holidaymakers can pet tigers and pose for photos with the big cats. It cannot be excluded that behind the tourist facade also illegal trade with tigers and tiger products is operated. Tourists on the hunt for a tiger selfie may be supporting the wildlife mafia with their entry," warns WWF expert Krüger. And the zoo director reports: "I myself have experienced fully grown tigers in Thailand, completely drugged up with tranquilizers, whereby the photo-hungry tourists did not even notice that the head of the closely chained animal had to be held up so that it looked somewhat awake. So we are dealing with a species conservation and animal welfare issue here."

Some 35,000 species of animals and plants are protected by the Washington Convention on International Trade in Endangered Species (CITES). International commercial trade in them is either completely banned or only allowed with permits. The WWF guidebook "Der letzte Schrei" helps with a simple traffic light system: red means "hands off", orange means permits must be presented, and green means "recommendable". Current trends and new legal regulations are also taken into account: Due to new trade laws, "saws" made from the upper jaw of saw rays are prohibited and decorative products made from most rosewood and ebony species are only allowed with conditions. Furthermore, due to avian flu, the import of live birds into the EU is now only possible with a veterinary certificate. The import of wild-caught birds is completely banned.

The WWF souvenir guide can be ordered from WWF: