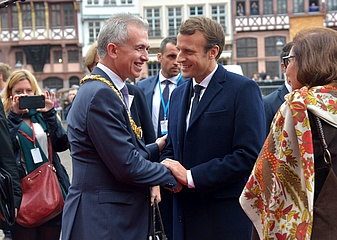 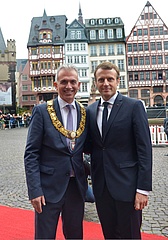 French President signs the Golden Book of the City of Frankfurt

Both Frankfurt's Lord Mayor and France's President referred in their speeches to Frankfurt's historical significance as the cradle of the European community of nations. "Frankfurt is the most international city in Germany and a city that has internalized the European value system," Feldmann stressed. For example, more than 12,000 people with French passports lived in the Rhine-Main region. For decades, Frankfurt has also maintained an extremely lively partnership with the French city of Lyon. Youth exchanges play a special role here.

Macron replied that the economic metropolis in the heart of Europe and coronation site of Charlemagne had defined Europe before the union of states even existed. He was delighted to be in Frankfurt, Macron said, stressing, "It was the same emperors who built this city and Europe before we invented it. So it is no coincidence that the Frankfurt Book Fair, as a place for the exchange of knowledge and international understanding, strengthens both Franco-German friendship and the European values of freedom and solidarity."