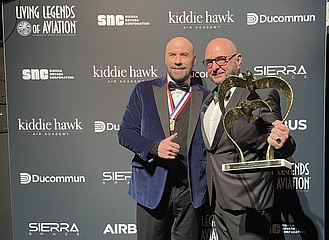 What do Jeff Bezos, Elon Musk, Neil Armstrong, John Travolta or Tom Cruise have in common with Bernd Breiter, the BigCityBeats CEO and founder of the worldwide WORLD CLUB DOME festivals? They are all laureates of the "Living Legends of Aviation" Awards, which were presented for the 19th time last Friday in Hollywood. Frankfurt's Breiter was among this year's winners of the prestigious aviation and aerospace award. He was honored in the Legends Humanitarian Recognition Award category.

The Living Legends of Aviation Award is an award that recognizes outstanding achievement in the aerospace industry in a variety of categories. The award has been presented annually since 2007 by the Kiddie Hawk Air Academy, a non-profit organization. The jury is made up of former award winners. The "living legends" have all made significant contributions to many areas of aviation. Bernd Breiter can now join the ranks of prominent award winners. The reason for this is his achievements in humanitarian work. In his visionary projects with the European Space Agency (ESA), for example, he combines science and entertainment to get young people excited about science and raise awareness of important issues facing humanity. Among other things, he built the first club in zero gravity, transformed cruise ships into floating clubs, airplanes into dance floors, and in 2019 sent ESA astronaut Luca Parmitano, who was trained as a DJ, to the ISS in space, from where he played a DJ set to Earth. As the main stage for the BigCityBeats WORLD CLUB DOME festival in Frankfurt, Breiter had a faithful 28-meter-tall Ariane rocket replicated.

Also his latest, once again very spectacular project, the "BigCityBeats - Space Club Kitchen", was developed in collaboration with the European Space Agency (ESA) to promote public interest in space exploration. It is the "largest club music dinner event of mankind" and will be held on March 19, 2022, simultaneously on the International Space Station (ISS) in orbit, as well as around the globe. The space-qualified Indonesian goulash ("Rendang"), developed for space by TV celebrity chef Tim Mälzer in collaboration with LSG Sky Chefs, will be prepared by ESA astronaut Matthias Maurer on the ISS and simultaneously also cooked by millions of people around the world. The astronaut even mixes a unique DJ set via Ipad at the dinner, which is shared by 50 dinner events on Earth, each of which features a celebrity chef with a top DJ spoiling his celebrity guests for a good cause. At the same time, this event is also the kickoff for Breiter's "One Billion Meals From Outer Space" Foundation, whose goal is to collect 1 billion meal donations for aid organizations.

It is actions like these that have earned Bernd Breiter the award. He was presented the award by actor and passionate pilot John Travolta. "When entertainment meets science, we can fascinate people with scientific topics. We want to use entertainment's powerful attention to science to showcase its immense importance to people. We create experiential spaces and connections between different worlds to get young people excited about science and space travel."

We congratulate Bernd Breiter on the award and wish him every success for the "BigCityBeats - Space Club Kitchen"! Of course we will report in advance more detailed about this event!