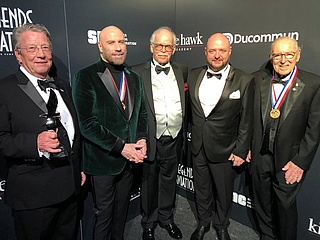 It started with an idea. Bernd Breiter, head of the Frankfurt media and event company BigCityBeats and visionary of the WORLD CLUB DOME, saw a documentary about space travel on television. With his visions of unusual places where he would like to set up temporary clubs, he had already caused a stir in the German event landscape many times. But now he had the idea to build a "club" in space. What many people dismissed as a crazy spinning mill was only a further incentive for him. He called the ESA and after some explanations he was heard. This was followed by the establishment of a "club" in weightlessness, space talks by DJs, the faithful replica of the Ariane 5 rocket on the main stage of the BigCityBeats WORLD CLUB DOME in Frankfurt and the sending of the first "DJ" into space: Luca Parmitano, who received lessons from Breiter and his resident DJ Le Shuuk on the turntables in the Columbus training module, played a DJ set on the International Space Station, which is transferred by the Breiters to a cruise ship converted into a club to Ibiza, the world capital of club music. The new ISS commander hoisted the BigCityBeats WORLD CLUB DOME flag on the ISS - a momentum that moved Breiter to tears...

The dream of Bernd Breiter became reality. But what has now emerged from a donation of the VIP proceeds of the Space Edition of the BigCityBeats WORLD CLUB DOME Frankfurt, even the Frankfurt entrepreneur would not have believed in his wildest dreams. Breiter donated 10,000 euros in the summer to the Frankfurt-based relief organisation Luftfahrt ohne Grenzen e.V./Wings of Help (LOG). Thereupon he received an invitation to the "Legends Wings of Help Award" in Los Angeles. This award is given to "Living Legends of Aviation" - to personalities who have made a significant contribution to America's aerospace industry through outstanding achievements.

Last Thursday, the awards were presented at the Beverly Hilton Hotel, exactly where the Golden Globes were presented eleven days earlier. And to the complete surprise of Bernd Breiter he was invited on stage at the award ceremony. His idea and implementation of the interweaving of science and entertainment to inspire young people for the topic of space was presented and fascinated the guests of the awards. After Breiter, Morgan Freeman came on stage to present the "Jeff Bezos Freedom’s Wings Award" to Capt. James Lovell, and in his speech he judged Breiter's ideas as "crazy". "Creative ideas and collaboration are important and an engine of the future," Freeman said, as was necessary on the Apollo 13 mission when Commander Lovell sent the famous sentence from space: "Houston we have a problem…"

After the award ceremony Bernd Breiter was even invited backstage for a photo with pilot Thomas Schrade, with actor, pilot and presenter of the award ceremony John Travolta, with laudator and LOG president Frank Franke and with Capt. James Lovell, astronaut of the two US space missions Apollo 8 and 13, asked. A moving event for the German entrepreneur. The US media were also enthusiastic about Frankfurt. Two US TV stations want to shoot the story of Bernd Breiter's way from music producer to the WORLD CLUB DOME in Space.

But that's still not the end of the story. Before his flight to Los Angeles, another ESA astronaut, Matthias Maurer, was "taught" live in front of 30,000 visitors as DJ of Le Shuuk at the Winter Edition of the BigCityBeats WORLD CLUB DOME. The 49-year-old will be the second person to perform on the International Space Station ISS as part of the cooperation between the European Space Agency ESA and the organiser BigCityBeats. During the event, Maurer talked about this idea and exciting moon plans with the Westdeutsche Allgemeine Zeitung (WAZ), which already called him a "moon DJ" in the newspaper. An idea of which Matthias Maurer said: "That would of course be a nice long-term perspective. I still have to convince the BigCityBeats boss Bernd Breiter a bit. But of course 'Moon DJ' would be a great title."

The next WORLD CLUB DOME will take place from 05. - 07. June 2020 in Frankfurt. You can find all information HERE