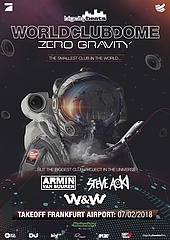 For the first time in history, a party will be held in zero gravity, featuring some of the world's most famous DJs. The party, dubbed 'The World's Smallest Nightclub' WORLD CLUB DOME Zero Gravity, will kick off on 7 February 2018 in cooperation with FRAPORT - Frankfurt Airport.

The only way to win a ticket to the flight is to send a 20-second video application to www.wcdzerogravity.com explaining why you deserve to be part of this once-in-a-lifetime experience. Only two winners (one male and one female) will be selected from each continent, plus two additional winners from Germany and India. This will make WORLD CLUB DOME Zero Gravity one of the most exclusive and groundbreaking events in music history.

The A310 Airbus, which has been specially converted into a club for the occasion and is normally used, among others. for ESA (European Space Agency) training flights for astronauts, among others, will take off from Frankfurt Airport on February 7 for a 90-minute flight with headliners Armin Van Buuren, Steve Aoki and W&W providing the soundtrack for this extraordinary experience. Partygoers and DJs will float back and forth together in zero gravity - an experience usually reserved for trained astronauts.

To be considered, applicants must share their 20-second application on social media and on the official contest page www.wcdzerogravity.com . The first round of winners will be announced in mid-January, where the WORLD CLUB DOME jury will select the top 10 from each continent. The final round of winners will then be selected by an online vote in conjunction with a panel of judges on 19 January 2018.

WORLD CLUB DOME Zero Gravity is further proof of how BigCityBeats continuously pushes the club scene forward with original and groundbreaking concepts. The WORLD CLUB DOME concept was developed in Frankfurt five years ago and has since pushed the boundaries of traditional clubbing several times. Dubbed the 'Biggest Club in the World', the event - one of the largest of its kind in Germany - covers an area of more than 700,000m&sup2;, it includes 20 gigantic stage backdrops, 200 spectacular headliners and the biggest laser show on the continent, combining the glamour of a club with the open-air feel of a festival.

Since its launch, the WORLD CLUB DOME concept has expanded to include the World Club Cruise, a 2000-person cruise around Europe, and WORLD CLUB DOME Korea, which attracted 100,000 partygoers in 2017. As part of this series of boundary-pushing events, WORLD CLUB DOME also launched the ICE Club Train in 2015, the "fastest club in the world", a high-speed train where international DJs and partygoers party at a speed of 320 km/h. 2015 also saw the launch of the Club Jet, the "highest club in the world", where partygoers could party in a Boeing 747 alongside some of the world's best DJs. A total of 330,000 people attended all BigCityBeats events in 2017, and WORLD CLUB DOME Zero Gravity is set to increase that number in 2018.