BigCityBeats - SPACE CLUB KITCHEN must be postponed
from FFM Aktuell 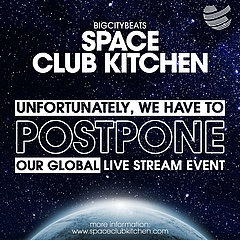 It was supposed to be an event that brings people together, that crosses borders and shows that we all live together on ONE world. For March 19, 2022, the "BigCityBeats - SPACE CLUB KITCHEN" was planned to be the largest "club music dinner event of mankind" on the International Space Station ISS in orbit, as well as around the globe to both poles and even into the deep sea. For months, preparations for the event initiated by Frankfurt-based event entrepreneur Bernd Breiter, CEO of BigCityBeats and creator of the WORLD CLUB DOME festivals, had been in full swing. The goal was to unite people around the globe at a common table with the help of universal languages music and culinary arts in cooperation with the European Space Agency ESA.

The world has unfortunately changed in recent weeks in such a way that such an event is currently not feasible: "The situation in Europe has changed dramatically in recent days. Unfortunately, this highly sensitive situation has also affected the activities of the European Space Agency (ESA), which informed us that all communication activities have been suspended until further notice. This also affects our event of the "BigCityBeats - SPACE CLUB KITCHEN on March 19, which we must hereby postpone with a heavy heart to a still undetermined date," explains initiator Bernd Breiter.

"We have always been and remain convinced that this project symbolizes a peaceful coexistence and is in no political relation. We have understanding for the decision of ESA, but because of that we came to the conclusion that our original idea to unite people from space and together with ESA astronaut Matthias Maurer will not work without his contribution."

BigCityBeats is in close dialogue with ESA and hopes that reason will prevail in the world as soon as possible and the message of this project can be conveyed at a later date hand in hand with all stakeholders. It is a message that has never been more urgent than it is today.

As soon as the situation allows and a new date is set, it will be announced. We will keep you posted.