BigCityBeats WORLD CLUB DOME - 180.000 visitors celebrate in the biggest club of the world
from FFM Aktuell 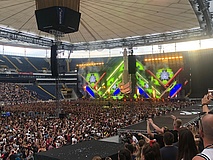 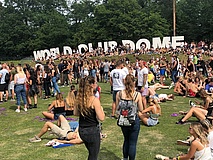 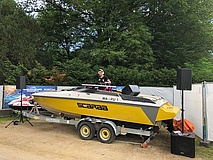 Although there were some weather caprioles, the visitors of the Space Edition of the BigCityBeats WORLD CLUB DOME didn't let the celebration spoil. The atmosphere in and around the Commerzbank Arena was also great in wind and rain, so that the organisers can once again draw a more than positive conclusion this year. 180,000 visitors from all over the world came to Frankfurt and once again made the Commerzbank Arena the largest club in the world for three days. And there was also a lot to celebrate: More than 230 DJs and acts played on the different stages and were celebrated by more party people than ever before.

And right on the first day there was the once again spectacular opening show, in which a 28 meter high, true-to-scale replica of the Ariane 5 rocket was shown in front of 55.000 visitors in the arena was unveiled, a real smashing message, which caused thunderous applause in the arena: BigCityBeats will send the WORLD CLUB DOME into space. Sounds crazy? But soon it will become reality! What exactly is planned has already been revealed: A DJ is brought to the International Space Station ISS. In order to create this interstellar club project, ESA astronaut Luca Parmitano was trained as a DJ by Bernd Breiter and his resident DJ Le Shuuk at the European Astronaut Centre EAC Cologne. Parmitano will be the first Italian commander on the ISS - and the first DJ to play the first set at Outer Space. The set will be broadcasted live to Ibiza on August 13, 2019 according to plan - to the BigCityBeats WORLD CLUB DOME Cruise Edition.

That's guaranteed to provide some spectacular pictures again. Stars like Marshmello or trance pioneer Armin van Buuren, who catapulted the crowded arena into a true sound ecstasy with their sets on the first day, showed that there is also a great way to celebrate here on earth. But not only the party guests were completely over the moon - also company founder Bernd Breiter. He received an award for his commitment to interweaving the fields of entertainment & science. ESA's Emmet Fletcher presented the Frankfurt astronaut with two solar cells from a wing of the Hubble Space Telescope, which was in space from 1998 to 2002. "This collaboration between BigCityBeats and ESA is just great and helps us reach young people. And in a way I never thought possible. And that's why I'm presenting this very special gift to Bernd Breiter - for his vision of uniting space and entertainment“, says Emmet Fletcher, Head of Partnerships Unit ESA. So a gift, not from this world.

One highlight chased the next

Whoever believed that all the party powder had already been shot with it made a huge mistake. The following two days were also a mega club party of superlatives. On Saturday the performance of Steve Aoki feat. Timbaland in the Mainstage was THE highlight of the day. Even in the run-up to the event, there was speculation as to how the performance might be received. Because the two Americans dared the almost impossible: They combined EDM and Hip-Hop. All in one set! Of course, the 55,000 party people in the arena didn't know how to stop. And when the surprise act The Black Eyed Peas came on stage without prior notice and celebrated and rapped along, the joy of the crowd could probably be heard up to the ISS. The Black Eyed Peas liked it so much at last year's BigCityBeats WORLD CLUB DOME Winter Edition that they spontaneously came to the arena to be there live. This can't be topped anymore? The Black Eyed Peas spontaneously played a small, intimate club concert in front of 150 people during the after-party and definitely created a “Never forgetting moment“.

The guests from 70 nations not only got some unforgettable moments in the arena. The new Outdoor Mainstage was particularly well received. Here they danced cheerfully to chart hits with Lost Frequencies, to house tunes by HUGEL from France, but also to electrifying and polarizing hip hop with Tinie Tempah and to dance pop with US superstar Jason Derulo. The empire for the hardest beats of electronic music was located diagonally opposite the Outdoor Mainstage: the Zombie Stage. Who the stage reminded of “Nightmares on Elm Street“ was quite right. It was dark, dark, hard and brute indeed, with two of the most successful hardstyle projects in the world: Bassjackers and Da Tweekaz. There were also small disappointments for fans. So some missed the set of Dimitri Vegas and Like Mike, which had to be brought forward on Sunday. But the great closing show that Robin Schulz had delivered made up for that.

Although it wasn't quite as hot as last year, the Pool Area was used by the visitors especially in the noon hours and the originally designed DIXI Stage caused some confusion at first, but then an amused grin - followed by an unbroken good party mood.

That and so much more was to be experienced at SPACE EDITION 2019. As the event was again such a great success, this news is not really surprising, which will not diminish the joy of the fans, because…

With the sets of Don Diablo, David Guetta and Robin Schulz the BigCityBeats-Club-Spacecraft drove out its landing flaps, heading for Frankfurt. But not without announcing the flight into orbit. The gates of the largest club in the world did not close without announcing the next trips to the club space. First BigCityBeats sends its vibes into space to the ISS in August 2019 - until the club spaceship then heads to Düsseldorf for the BigCityBeats WORLD CLUB DOME Winter Edition in January 2020. The first big party of the year will be attended by none other than the DJ World Rankings First: The One and only - MARTIN GARRIX!

And also the summer edition of the all-encompassing club happening has been announced: On 5, 6 and 7 June 2020, Frankfurt will once again become the earthly homebase of Club Music. We are guaranteed to be there again - you also?

Save tickets now at www.worldclubdome.com