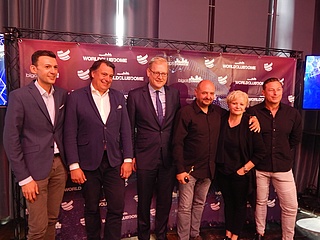 What will be presented to the visitors of the WORLD CLUB DOME becomes more and more spectacular when the area in and around the Commerzbank Arena turns into the biggest club in the world again. After the first club in weightlessness at the beginning of February was celebrated as a literally up-and-coming pre-party , this event must of course be topped again at the actual WORLD CLUB DOME on 01 to 03 June. “It is becoming increasingly difficult to implement what Bernd Breiter is thinking up“, City Councillor Markus Frank reveals at the press conference. But this year, too, it was possible to get through all the approvals. After all, the city of Frankfurt is well aware of the international significance of the festival. One would not have expected such a development in the beginning, Frank reveals. But the festival, which has also become a successful export hit with offshoots in Asia, is very good for the image of the city of Frankfurt as a young, international city.

For the first time the three-day party 2018 has a motto: Celebrate the “Hollywood-Edition“. Over the longest red carpet of the world some international stars will step (who, was not betrayed yet). In cooperation with the Kinopolis chain, there will also be a large pop-up cinema. A real breath of Hollywood is supposed to blow over the festival area. But there will also be proven ones again - even bigger and more spectacular than before. The Main Stage in the Arena is making full use of its capacities again this year. There will also be the WCD Pool Sessions in the Stadionbad again. And for those who want to get a little creepy at parties, the new Zombie Stage is the place to be.

Afrojack, Alle Farben, Axwell/\Ingrosso, Dimitri Vegas & Like Mike, Eric Prydz, Gestört aber Geil, Le Shuuk, Lost Frequencies or  Tiesto belong to the international line-up that will provide rich beats and mega atmosphere on the different stages. Supported by state-of-the-art technology, including over 20,000 square meters of LED area and powered by over 48km of power cables, there will definitely not be one on the three days: Boredom! But with all the celebrations, the safety of the visitors is particularly important to the organisers. It should be guaranteed that nobody has to worry about his safety not only on the premises, but also on the way to the WORLD CLUB DOME and back home. This is also ensured by the close cooperation with RMV, which is significantly expanding its range of services this weekend. After all, up to 55,000 visitors per day are expected - and they also want to be promoted.

You can be sure: This WORLD CLUB DOME will again be a real event. The team around Bernd and Carina Breiter has again made the impossible possible. Bernd already has more ideas on how he wants to top this mega-event. Of course, he doesn't want to reveal anything about it, because after all, the “Hollywood Edition“ is now supposed to put visitors from over 60 countries into an enthusiastic party frenzy. And there is not the slightest doubt that this will succeed!