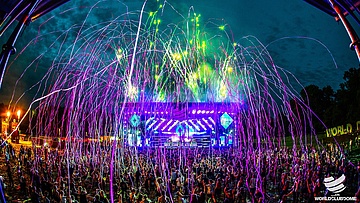 After two pandemic-related cancellations, it should finally be time in June: The "biggest club in the world" returns to Frankfurt: the Las Vegas Edition of the BigCityBeats WORLD CLUB DOME celebrates the return of the successful event with a great line-up. Taking part from June 03 - 05 are more than 300 DJs, acts and artists who will celebrate with around 200,000 world clubbers indoors and open air. Among them are David Guetta, DJ Snake, Robin Schulz, Scooter, Steve Aoki, Sven Väth, Timmy Trumpet and Le Shuuk. New confirmed acts include. Angerfist, Blasterjaxx, Deadmau5, Dimitri Vegas & Like Mike, Da Tweekaz, Headhunterz, Glockenbach, Laidback Luke, NERVO, Neelix, Tchami, MOGUAI, Sido, W&W

The only electronic festival in Germany with two mainstages

The BigCityBeats WORLD CLUB DOME is the only electronic music festival in Germany with two mainstages. The indoor main stage is enthroned in the infield of Frankfurt's Eintracht soccer stadium. The outdoor main stage is located directly in front of the Deutsche Bank Park stadium complex and features real top-class acts. Special highlight: On Sunday there will be a HipHop takeover on the Outdoor Mainstage. Juju and Sido are already confirmed for this. Other greats of the genre will be announced in the coming weeks.

Unquestionably among the global players is Angerfist from the Netherlands. The man with the "Hannibal Lecter" mask is one of the pioneers of the hardest sound that the electronic music scene has produced: Hardcore. He fills halls with 10,000 visitors - and also at the BigCityBeats WORLD CLUB DOME Las Vegas Edition thousands dance to his sounds, on the open-air stage "Zombie Stage".

The world's club music, represented over three days and on about 30 stages. EDM, trance, bass, trap, future house, progressive, psytrance, goa - that's the BigCityBeats WORLD CLUB DOME Las Vegas Edition 2022. And the worldwide club music also includes: techno. The sometimes most original sound of electronic music is located in the open-air area of the site. Green meadows, blue skies, refreshing pools, bombastic sound, the imposing skyline of the big city in the background and a touch of Ibiza when the planes from Frankfurt Airport, which is only a few kilometers away, take off and land above the party people. These are the WCD Pool Sessions. The perfect summer event as part of the WORLD CLUB DOME!

But that's by no means all. In 2022, the "biggest club in the world" is waiting with very special stage hosts. Boris Brejcha and his FCKNG SERIOUS Brand will take over the WCD Pool Sessions stage on Friday. A premiere in the German festival landscape will take place on Saturday. For the first time Jamie Jones' Paradise Label hosts a festival day in Germany. This one is all about Cocoon on Sunday. And Claptone is in charge of the Frankfurt Berg Stage on Sunday with Masquerade.

Tickets for the Las Vegas Edition of the BigCityBeats WORLD CLUB DOME are available in the current pre-sale stage for 127.00 euros plus fees (3-day club ticket) at: www.worldclubdome.com/las-vegas