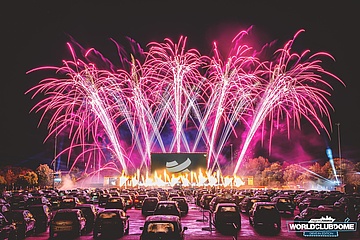 The Las Vegas Edition of the BigCityBeats WORLD CLUB DOME was supposed to take place on June 5th - 7th in the Commerzbank-Arena Frankfurt. But since all major events have been cancelled until at least August 31st, this internationally popular event is also cancelled. But the team around BigCityBeats CEO Bernd Breiter is known for creative solutions and spectacular ideas. And so an alternative version of the Las Vegas Edition will be launched on the planned WCD weekend - a mix of real and virtual party for all WORLD CLUB DOME fans. For three days, the world's biggest club will be coming on all channels and for all senses from the net, from Mannheim LIVE, from Stadionbad LIVE and all over the world.

The spirit of Las Vegas - the city of entertainment and lights - will be brought to the fans. Not an easy task in these difficult times. But the BigCityBeats team has come up with a lot of ideas to create real WORLD CLUB FEELING.

Loose will be on Friday 5 June 2020, the original opening day of the "biggest club in the world". Here the first virtual record release party will take place as part of the live stream on bigCItyBeats.FM and the YOU FM BigCItyBeats. Celebrated is the release of the "BigCityBeats WORLD CLUB DOME Vol. 32" label coupling and from 18.00 clock in the stream on www.worldclubdome.com and from 20.00 clock LIVE on youFM.

The successful compilation by BigCityBeats, which almost always makes it to the top of the charts, is this year's motto "Las Vegas Edition" and delivers many tracks and artists who would have played at the WORLD CLUB DOME. The perfect warm-up sound for the big BigCityBeats WORLD CLUB DOME digital weekend.

Saturday, 06. The big livestream will start at 12.00 pm on Saturday, June 6th, exactly at the same time when the gates would open in Frankfurt's Commerzbank-Arena. First of all, the DJ superstars on bcb.fm are going to give themselves the "jack". Then, towards the evening, something happens that no one would have expected: a colourful live show with fire columns, lasers, CO2 cannons, lots of pyrotechnics and - of course! - great sound. While the WorldClubbers have to be patient until June 2021 for the Las Vegas Edition in Frankfurt for well-known reasons, the forecourt of Mannheim's Maimarkthallen will become one of the nation's largest dance floors: 600 "dancing" cars with a total of 1,000 party guests - and hundreds of thousands in the livestream. Live on Stage: Disturbed but GeiL and Le Shuuk. Live switched on screen: EDM superstars from many countries. But that's not all. Friends of the harder sounds of dance music can look forward to a Zombie Stage Takeover at the Drive-In. Another highlight of the evening: the announcement of further DJ headliners for the BigCityBeats WORLD CLUB DOME Winter Edition at the beginning of January 2021 in Düsseldorf.

On day 3, the WorldClubber awaits from 12.00 o'clock the spectacular final day of the alternative Las Vegas Edition. Live from the Stadionbad in Frankfurt, the WCD Pool Sessions will broadcast their digital edition with a hand-picked selection of DJs and exclusive sets. The WCD Pool Sessions also deliver a great summer day as a live stream. And from around 18.00 hrs on, there will be a virtual trip to the Mainstage, where there will be a festive firework display with top-class top DJs. The ultimate finale for the biggest BigCityBeats WORLD CLUB DOME Digital Weekend 2020.

The pre-registration for the Las Vegas Drive-In has already started - advance sales will start soon. You can find more information under: https://www.worldclubdome.com/