BigCityBeats WORLD CLUB DOME is cancelled in 2020
from FFM Aktuell 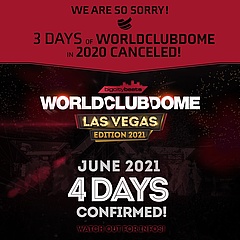 Many fans have already feared it, but with the announcement that no major events may take place until at least 31. August, it became a certainty: the BigCityBeats WORLD CLUB DOME cannot take place in the Las Vegas edition planned for 2020. "Health is the most valuable asset we have," BigCityBeats CEO Bernd Breiter said of the need to cancel the globally popular event. "We have to protect ourselves, keep our distance, and do that until further notice. Until the corona virus is defeated. We have been in constant communication with the authorities from the beginning. Of course we are sad that the WCD cannot take place this year. But everyone's health and lives come first. That is also our responsibility towards our visitors, loyal fans and the 1,500 people who work for us during the event. For that, we're even more excited for the Las Vegas edition in 2021, and it's going to be bigger, more spectacular and longer than ever!"

After all, there will be an extra day to celebrate next year. Accordingly, the Las Vegas edition is scheduled to take place on June 3, 4, 5 and 6, 2021. Four days is an absolute premiere due to this year's cancellation of the WCD. The gates will therefore open one day earlier, on Corpus Christi (public holiday). The WorldClubbers will get access to the Outdoor Mainstage on the grounds of the Commerzbank Arena, where numerous international top acts will already be performing then.

For all those who had already bought tickets for 2020, the following applies: all ticket holders will be contacted by e-mail shortly and informed about what will happen to the tickets they have already bought. "Of course, the money is not lost. We will examine all options available to ticket holders in this exceptional situation and announce them shortly. What is certain is that we will reward the loyalty of our community. This will include a one-off discount promotion for the BigCityBeats WORLD CLUB DOME Winter Edition 2021," says Bernd Breiter. The BigCityBeats WORLD CLUB DOME Winter Edition will take place for the third time in a row on January 8, 9 and 10 at the MERKUR SPIEL-ARENA Düsseldorf. More information about this event is yet to be announced on the social media channels of BigCityBeats and WORLD CLUB DOME.

With the BigCityBeats Club Village, Frankfurt's "47th district" is being created especially for the BigCityBeats WORLD CLUB DOME Las Vegas Edition 2021 - with a marketplace, stage and much more. All in the style of Las Vegas, of course. Here, the WorldClubbers can camp and stay overnight at a reasonable price - and will be chauffeured comfortably to the arena in shuttle buses. Furthermore, thanks to various cooperation partners, there will be inexpensive hotel packages.

In the faithful replica of the Las Vegas Chapel, lovers can say yes in 2021, in front of the world-famous tree and with "Elvis" as their witness. Applications can still be sent to marry@bigcitybeats.de. Simply email an original video with the marriage proposal, and with a bit of luck the couple will fly over the entire party area in the BigCityBeats helicopter after the wedding ceremony.