FAHRRAD THÖT - A traditional shop closes down
from FFM Aktuell 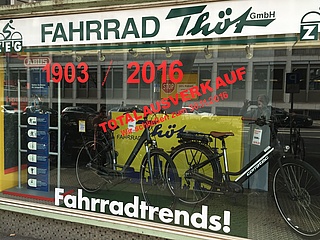 The bicycle shop THÖT at the Kleinmarkthalle is one of the great traditional shops in Frankfurt. There are probably only a few Frankfurters who do not know the shop, bought their bike here or once had a tire mended. An enormously large selection of bikes and accessories and always competent and friendly advice have made THÖT a real institution. But after 113 years, it's over on 30 November 2016. The reason for this is in particular the end of the Sportarena at the Hauptwache. Here THÖT was also represented - but now this enormously important source of income falls away.

This has the consequence that also the traditional location at the Kleinmarkthalle can no longer be held. And so the sell-out has already begun. In a few weeks, Frankfurt will be poorer by a traditional store. Certainly, changes are unavoidable in a city like Frankfurt, and in some respects they are good. But when it comes to real institutions that have somehow always belonged to Frankfurt, it is a little painful to see them disappear - especially since they are usually replaced by interchangeable branches of large chains. But it's shops like Fahrrad THÖT that give the city a bit of individuality.

So if you want to say goodbye to a real piece of Frankfurt, you should take advantage of the last few weeks and do your bike some good!

FAHRRAD THÖT can be found at Hasengasse 7, 60311 Frankfurt am Main, right next to the Kleinmarkthalle