Bikecitizens - A Bicycle App for Frankfurt
from FFM Aktuell 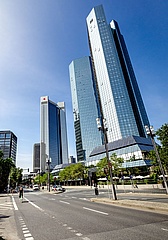 Bicycling in the city of Frankfurt is truly not always a pleasure. Now the free navigation app ,bikecitizens' aims to make life easier for cyclists. The app is supposed to help the city to further develop the bicycle network. The city is already trying to do this with new cycle paths, eye-catching markings and additional parking facilities. But for people who cycle in the city every day, it is clear that there is still a lot of room for improvement. Since Friday, 29 May, another step has been taken to make Frankfurt an attractive cycling city: The possibility to download the navigation app "bikecitizens" for free, with which you can be guided comfortably through Frankfurt's bike network. The free access for cyclists was made possible by a cooperation between the city and the provider of the app. The "bikecitizens" app is now available for Android and iOS smartphones.

The maps displayed in the app can be downloaded by users, routes can be announced using voice control. Clear advantage here: The navigation thus works even without active Internet access. The app also offers suggestions for cycling tours and a "heat map" that visualizes the user's own activities. In addition to route planning, the app also offers other city-specific information.

The routes taken are recorded anonymously and thus provide information about which routes are actually taken by Frankfurt residents by bike. When recording the routes, the strict requirements of the DSGVO are of course met. The first and last hundred meters of each path are not recorded - this prevents paths traveled from being assigned to individual addresses.

In addition to the goal of offering cyclists this free digital service, the city's main reason for the cooperation is to create a better planning basis for the further expansion of the existing bike network.

Transport department head Klaus Oesterling says of the app: "In our city of short distances, cycling is becoming more popular every year. Now we want to create Frankfurt as a cycling city. To do this, we want to have the best possible planning basis available. In doing so, it helps us to know even more precisely the routes that Frankfurt residents actually take by bike. The use of the app can thus make a valuable contribution to making cycling planning in Frankfurt particularly citizen-friendly and needs-based. Therefore, the city supports the &sbquo;bikecitizens'-App and would like to encourage the cycling population to make use of this smart service."