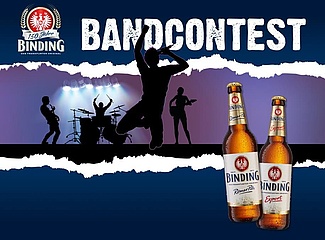 Now the winners will be chosen! </The Binding Brewery is not only known for its beer, but also for its commitment to Frankfurt and the region at various locations. Whether it is the reconstruction of the Goetheturm or the awarding of "Frankfurt Originals" - for Binding, the cultivation of tradition is just as important as the relationship with the people of Hesse. That is why musicians from the region will be supported by the "Binding Band Contest" again this year. Binding received a total of 128 applications from all over Hesse, from which five finalists were selected. And now it says: Vote your ass off! </p>

Until 31 March 2020, everyone (aged 18 and over) is invited to choose their favourite under https://aktion.binding.de/.

And these participants vie for the favour of the audience: "Thursday in March" from Dreieich convince with rousing Pop-Punk, "Revolte Tanzbein" from Frankfurt provides with German-speaking Balkan Ska for good mood, "April Art" from Middle Hesse heat up with powerful rock song, "Anti Smile" from Aschaffenburg deliver a pure mixture of Pop-Punk-Rock and "Carolyne Pirulli & Band" from Mannheim enchants with first-class soul and RnB. The goal of all these musical talents: To win a unique performance on the Binding stage in front of the still secret main act on August 1st plus a prize money. </Goose pimples and a good mood with the jury </strong>

The decision was not an easy one for the jury, which included representatives of the Binding brewery, the Binding brand ambassadors Mundstuhl and the music experts Michael Kercher, Oscar Canton, Michel Greulich and Björn Lautenschläger from Journal live as well as Felix Moese from Hit Radio FFH. "We looked at and listened to a colourful bouquet of great applications from all over Hesse. That gave us goose bumps, teetering feet and a great mood," says Claudia Geisler, press spokeswoman of the Binding brewery. "Now we are looking forward to a high participation in the final voting and are eagerly awaiting our three winners". </Not only the winners of the band contest, also the participating voters can win great prizes. Because everyone who takes part (participation possible from 18 years of age) has the chance to win 50 x 2 tickets for a concert by the Binding brand ambassadors Mundstuhl and 100 x 20-euro consumption vouchers for the Binding Brewery Festival on 1 August. But beware: you may only vote once a day. </p>

All information as well as the profiles of the finalists can be found on the Facebook page of Binding and at: https://aktion.binding.de/