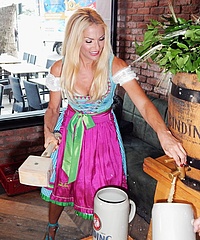 The Frankfurt Oktoberfest has long since established itself as a permanent fixture in Frankfurt's events calendar. Tickets are selling like hot cakes and visitors appreciate the cosy atmosphere in the festival tent, which will once again be located at the Commerzbank Arena from 12 September to 7 October. Of course, the Frankfurter Oktoberfest also includes the Frankfurter Festbier, which will once again come from the traditional brewery Binding in 2018. A few weeks before the official tapping of the barrel, Binding invited guests to taste the first sips of the 2018 vintage of the festival beer. A special location was also chosen for this special occasion: the new Frankfurt Wirtshaus on the banks of the Main.

Claudia Geisler from the Binding brewery's press and public relations department is proud that Binding has been a partner of the Frankfurt Oktoberfest with heart and soul for ten years: "Our heart and soul goes into the Festbier tasting in particular, where our guests can enjoy the full-bodied taste of our Binding speciality. It's great that we can taste the 2018 anniversary vintage in the new Frankfurt Wirtshaus," says Geisler.

The keg was tapped by Frankfurt native<link https: www.frankfurt-tipp.de ffm-aktuell s ugc sonya-kraus-wird-botschafterin-fuer-das-frankfurter-oktoberfest.html _blank> Sonya Kraus, who is this year's ambassador of the Frankfurt Oktoberfest. The presenter cut a very fine figure in her dirndl, as befits her profession. "I know how to use a hammer," laughed Kraus, who had already demonstrated just that in the DIY show "Do It Yourself - S.O.S". And so all it took was one powerful blow and the amber-coloured festival beer flowed into the mugs provided. Peter Winter, 1st Brewmaster of Binding, was satisfied, but also explained that this tasting was not yet the final festival beer. "The beer still needs the next few weeks to develop its full flavour," said Winter. "We have selected only the best raw materials, brewed sample brews and, after maturing with a trained palate, created a Binding speciality that impresses with its malty, aromatic, full-bodied and quaffable character," continues the brewmaster. "A true festive beer, in fact."

During the Frankfurt Oktoberfest, the Festbier will be available at selected gastronomy partners in the region and, of course, in the festival tent at the Commerzbank Arena. There, as Dennis and Patrick Hausmann announced at the Festbier tasting, there will also be some new additions to the menu. In addition to the popular Oktoberfest classics, this year's menu will also include a Hanskäs cream soup, veal bulette with braised onions on toasted country bread, or Kaiserschmarrn with apple mousse or plum roaster. But if you want to be in the marquee, you have to hurry: There are only a few remaining tickets! At the latest after the successful evening in the Frankfurt Wirtshaus should be clear that the mood at the Frankfurt Oktoberfest will be great again.